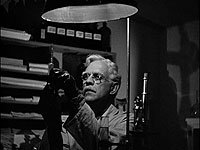 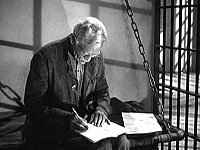 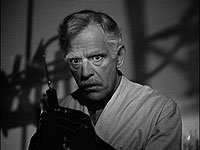 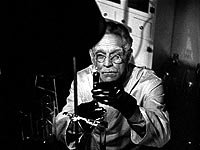 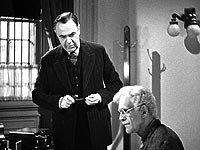 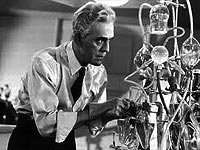 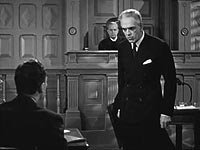 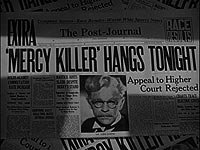 This film I never heard of until I was working through a horror movie encyclopedia. I came in blind aside from reading a small blurb they had in it, but I was intrigued when I learned that this starred Boris Karloff. I had seen a few of Universal films prior to this, but aside from that, I was pretty new to his work as well. The synopsis here is a physician on death row for a mercy killing is allowed to experiment with a serum using a criminals' blood, but secretly test it on himself.

We start this off through a newspaper headline learning that Dr. John Garth (Karloff) is convicted of murdering a friend who was dying. He tried to put him out of his misery and this dubs him the 'Mercy Killer'. The doctor has been convicted of murder in the eyes of the law and sentenced in one month's time to be hung. In the court with him is his daughter Martha (Evelyn Keyes), and her fiancé Dr. Paul Ames (Bruce Bennett). They vow they'll continue to work to get him out.

He arrives at the prison and is brought to meet Warden Thompson (Ben Taggart), as well as Dr. Ralph Howard (Edward Van Sloan). They believe in the work that he was doing and want to allow him to continue it in prison until his execution. Dr. Garth believes that human cells are immortal and that they produce waste that is what causes us to age and ultimately kills us. He thinks he can prevent this from happening.

While they work, they are interrupted by a convict who does janitorial work, Otto Kron (Frank Richards). A guard comments that he's sneaky and they aren't a big fan of him. He also informs them that their time is up for the day, but Dr. Garland gets the guard to leave and asks Dr. Howard about getting blood from a murderer who is to be hung the next day. He agrees since he will conduct the autopsy afterwards.

They believe they've succeed in perfecting the formula from a test. It is decided since Dr. Garth is to be executed the following day, he will be the guinea pig. For his last request, he asks the warden if he can work in the lab with Dr. Howard to make sure he knows how to do everything after his execution. He doesn't see anything wrong with this and agrees.

They administer it to him and monitor what happens. The warden then shows up, but something unexpected happens. He gets a stay and his sentence is commuted to life imprisonment. Dr. Garth then passes out and Dr. Howard relays the changes that have happened. Dr. Garth went into a short coma, but he no longer needs his glasses to see, his hair isn't completely white anymore and metabolically he is 20 years younger. There's also another side effect that is much deadlier.

Now it's been a few years since the last time I saw this movie and I'll be honest, I didn't really remember a lot about it. The title of the movie though is quite interesting, as there's quite a bit of tension building to Dr. Garth's execution. We of course though get a bit of convenience that they're able to make the major discovery before that happens. I'm willing to give a bit of leeway here though as he thought he had previously. Combining his knowledge with Dr. Howard I can buy what they're selling.

What this movie does really well is establishing our baseline for Dr. Garth. He is dubbed the mercy killing and he doesn't think he did anything wrong. This is an interesting story here for a movie that is 80 years old as committing euthanasia was a hot button case with Dr. Kevorkian. It makes it believable as well that he could operate in this prison like he is, as the risk isn't necessarily there in my eyes. He does have some limitations so it isn't too far out of the realm.

This movie really does end up boiling down to a Dr. JekyllMr. Hyde type story. By mixing the blood of a criminal into the serum they create, it taints it. I'm willing to give leeway here though, since science was a bit more primitive for the era. Heck, this is a common thing that was done in Universal and Hammer Horror films for decades. This movie does handle it pretty subtly and to be honest, a lot of credit from me goes to the performance of Karloff.

Since I've already touched on it a bit, let me delve a bit more. Karloff is made up to look older than he was at the time so when he starts to become younger through a cell level, they can reign it back. On top of that, when the killer's blood in him starts to take over, I like that he has tics that Dr. Garth didn't have. I almost feel this movie would be better served to have shown the killer to establish, but I get what they're doing. His performance here is the best by far. I thought the rest really did round this out for what was needed. If I give anyone else credit it is Sloan who is working with him as well as Dr. Garth's friends of Victor Sondini (Pedro de Cordoba), George Wharton (Wright Kramer) and Stephen Barclay (Bertram Marburgh).

Aside from that, I really should just cover the effects which there really aren't any. We get to see the experiments on a very surface level with Dr. Garth and Dr. Howard. I don't think that hurts the movie as the science they are doing isn't based in reality. I really the concept of it though. The performance of Karloff as I said shows us the 'Hyde' version and just how he is done up to look older is really it. Everything else is off screen. The cinematography is fine, but it doesn't necessarily stand out.

Now with that, I do think this is playing with the JekyllHyde story in an interesting way. What Dr. Garth is trying to do with helping his friend as well as trying to reverse the aging process is a good concept. His performance really cares this movie with establishing his norm and an older look to reverse that after using the serum on himself. I do think that the movie is too short and cut out some aspects that would really help to strengthen what they're doing. Not a bad movie, just lacking to really make this more of a classic in my eyes hence why it is somewhat obscure. It is really just over average in my opinion.