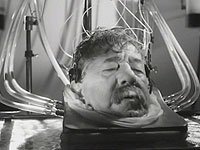 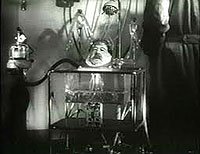 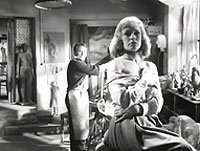 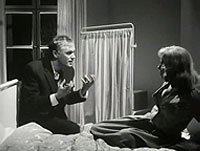 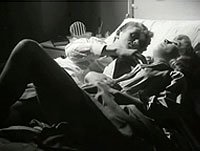 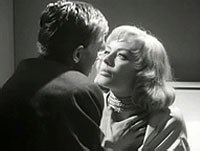 Psychotic Dr Ood (crazy-eyed Frank) is a maniacal genius who has the opportunity to perform a miraculous operation with a secret serum Z, when his boss dies on the operating table mid-experiment. Preserving Michel Simon's head for the purposes of its extraordinary brain content, the twisted Dr Ood is soon looking for another victim on whom to perform his gruesome experiments, when the crippled Sister Irene (Kernke) reluctantly agrees to undergo an operation that promises to correct her debilitating condition, stooped like Quasimodo with a shuffling gait to match. But the once unassuming woman, who cannot bear to look upon her hideous deformity, soon discovers that perfection comes at an unaffordable cost.

Occasionally atmospheric and displaying good use of sets and lighting, the preposterous premise shouldn't necessarily paint itself into a corner, after all, Jason Evers succeeded in "The Brain that Wouldn't Die" and even Steve Martin was able to coax a laugh or two from "The Man With Two Brains" (I won't include "The Thing with Two Heads" in this analogy). Frank is better than the material with which he had to work, yet unfortunately, his credentials don't spare much goodwill on this modest little sci-fi that attempts to double as a psycho-thriller but fails to reach its potential.

Review by Chase_Witherspoon from the Internet Movie Database.