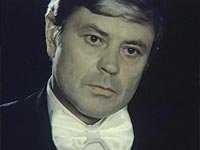 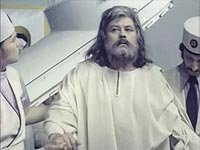 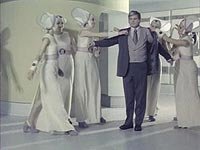 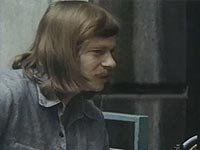 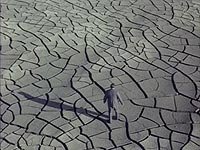 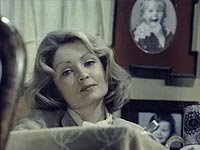 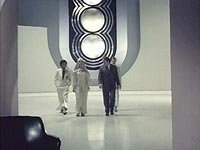 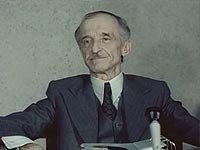 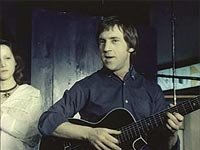 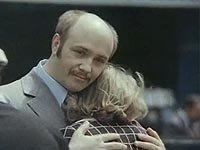 This film seems to be well forgotten. It is not available on DVD or even VHS, it is seldom shown on TV, and, even if you manage to see it, there is no English translation. In short, you have to try really hard to see it.

Which is good, because there is not much to see. The film fails in so many ways.

First, the basic premise. Mr. McKinley is a poor and rather miserable clerk. He has no family or children, because he is too afraid his children will have to suffer in a cruel world. Then he learns of a company that is offering some sort of time travel: living people are preserved in special atmosphere and woken up after a couple of hundreds of years. He decides that probably future will be kinder to him, so he desperately tries to get preserved. Unfortunately, prices start at $20,000, a bit too much for Mr. McKinley.

So he tries to do something about it. At first, he tries to sneak in a preservation chamber during his tour to the company facility. When that does not work, he decides to befriend, murder and rob an old but wealthy lady. However, that does not work either, and Mr. McKinley becomes so upset that he is trying to kill himself. Fortunately, at the last moment he finds a winning lottery ticket that is enough to pay for the preservation.

Mr. McKinley awakes 250 years later in a bare, deserted world destroyed by nuclear warfare. He cries out in repentance, only to wake up and find out that it was all just a dream. Now awake, he sees his girlfriend who sits by his side and demands that he marries her, and Mr. McKinley, now being a reformed man, finally agrees to do so. They go out and Mr. McKinley even shows his transformation, standing up for a small kid who has been constantly abused by the kid's boss.

The happy ending feels forced and unnatural, and indeed it is: originally, it was not a dream and after arrival to the future, Mr. McKinley was supposed to be judged for abandoning the Earth and not doing anything to prevent its destruction. This would be more in line with the dark and moralistic tone of the film, but somehow was deemed inappropriate.

Apart from the ending, the film has lots of other faults. The Western city Mr. McKinley is living in (probably in USA, because they are using dollars) is actually socialist Hungary with very unconvincing Capitalist make-up. It feels much more like Soviet Union with English signs (sometimes even showing the original Hungarian ones): commercials, signs and other Western paraphernalia are stiff, amateurish and not too creative, and the film relies too much on them to provide the Western look. A great example is Mr. McKinley's visit to red lights district: the sex shops and brothels look as kinky as a Soviet department store. The film tries so hard to show that the Western world is a hell-hole of neverending human misery: desperate women become prostitutes with bad wigs, a popular form of entertainment is bloody, cruel wrestling, bosses abuse their workers, children run away from home and so on and so forth. The detailed description of the Capitalist horrors takes time, so the film is almost two and a half hours long. However, it also gets boring.

In all fairness, the bad points are not unique to this film: many Soviet films are ruined by their utter inability to show a plausible Western city or country. Moreover, the film has its good points: Donatas Banionis is quite plausible as the little, insecure Mr. McKinley. The preservation facility looks a bit cheesy, but still very well done. Mr. McKinley turns for advice to a Catholic priest, who gives some real answers and does not look like the common Soviet religious caricature. The ballads of Vladimir Vysotsky are really great.

The film definitely had a potential. However, it is trying to push its message too hard, thus ruining it. Probably the original ending could have improved it enough to overlook the grossly inaccurate portrayal of Western society or blatant propaganda. Unfortunately, it is even less available than the film itself. If it ever comes on a DVD with the original ending and English translation, you may watch it, if only to get an impression how the Western world was portrayed in the USSR. As for now, however, the film remains virtually unavailable, and you are not missing too much.

Review by Gadianton 5 November 2007 from the Internet Movie Database.