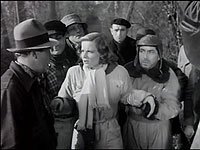 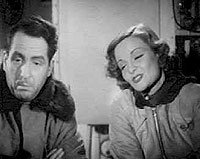 The European Space Programme suffers its first setback when Julien Carette opens the window of his capsule to smoke a cigarette and blasts himself and fellow astronaut Madeleine Sologne 25 years into the future. When they return to Earth it's 1967 and everyone's dressed in sparkly suits like game show hosts. An organisation, Croisières Sidérales (Star Cruises), is set up to exploit the commercial possibilities of time and space travel, and a new rocket is sent up with a cargo of passengers destined for the year 2000. Unfortunately, the accident-prone Carette is once again on board...

Fantasy and escapism were popular themes in French cinema during the German Occupation, but this was the only film that took audiences to other worlds and future times. When the movie was released, it was accompanied by a short film explaining the Theory of Relativity on which the story is (very loosely) based. This caused some problems for the director André Zwoboda, who was summoned by the Nazi authorities and asked to explain why he was promulgating the ideas of Albert Einstein, a Jew.

The set designs (by Henri Mahé, who worked with Gance) evoke the fantasies of Méliès, though the film lacks the charm and innocence of those early silents. There's some broad comedy with Carette and the other eccentric passengers clowning around in zero gravity, an underdeveloped romantic plot involving Sologne and her husband (who make an extraordinary sacrifice to level their age difference), and even a Busby Berkeley style dance number that must have eaten up half the budget.

Sadly, there's little attempt on the part of the screenwriters to engage either seriously or satirically with the ambitious ideas of the premise. When the travellers return to Earth (via a visit to some smug Venusians) the only lesson they seem to have learnt is to stop messing about with science and be happy with what they've got.

Review by kinsayder from United Kingdom from the Internet Movie Database.