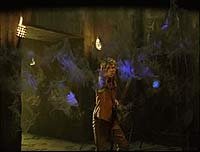 From the day I first heard that Fox was producing Eragon, I knew that the movie would be bad. Normally I don't judge movies before they've come out, and especially not by their production company, but I also saw a trailer for the movie the same day. It looked terrible: average CGI flaunted as wonderful (or, rather, wonderful CGI used so poorly it only looked average), wooden acting, terrible dialogue, a plot that is essentially a rip-off of Star Wars. My expectations grew worse with more information about what the movie would be like.

What I got was far worse. Not only was there wooden acting, terrible dialogue, and a rip-off plot, but the movie was boring. I found myself looking at my watch every five or ten minutes, and only stayed because I was with a friend who didn't want to leave. I began to look at the short length as a good thing rather than a bad thing; I don't think I could have sat through another half hour of the movie.

John Malkovich (Galbatorix) was one of the most unconvincing villains ever, albeit second to Robert Carlyle (Durza). To be fair, both were given terrible dialogue, and Carlyle was dressed up to look like a clown-'complete with a red-orange wig and lips outlined in red (which reminded me of Damodar's blue lipstick in Dungeons and Dragons-'maybe it's required that all bad sword-and-sorcery films have villains with right-hand men that wear lipstick). Malkovich seemed to rely on pronouncing his R's to convey his villainous ways; other than that, and the voice-over at the beginning, it was impossible to tell he was the antagonist. Edward Speleers also had terrible lines, although a better actor could have made something of them, and there were scenes in which all he had to do was to convey basic emotion without speaking lines. There was no sadness at all when his mentor, Brom, died to save his life; instead there was just an expression that looked like annoyance. Sienna Guillory (Arya) seemed so out of character the entire movie that I think it has to be blamed on the director, Stefen Fangmeier and not Guillory.

The movie opened with a voice-over that lasted too long and did nothing but tell the plot so that the actors didn't have to show it. After the VO, there was brief character introduction-'too short for the audience to begin to identify with anyone-'before going straight into mediocre action scenes. Even the scene that was supposed to introduce the relationship between Eragon and his cousin Roran ended up in a friendly scuffle between the two, perhaps because Fangmeier wasn't capable of directing a scene that had no action element to it. It is made clear in the beginning that the soldiers are the antagonists, but there is no real reason to care for the "good guys" other than that the VO at the beginning said so.

From the time Eragon and Brom leave Eragon's village, Carvahall, the plot leaves out most of the important plot and character development scenes from the book, perhaps to stay away from the feel of Lord of the Rings. However, the omissions of things such as Brom's teaching Eragon the Elvish language lead to plot holes that could easily have been avoided. The scene at the end in which Eragon risks his own life for the chance to save Saphira's loses most of its potency because Fangmeier failed to include Brom's lecture to Eragon about the fact that a spellcaster cannot choose not to complete a spell that begins to cast and so risks death every time he casts a difficult spell.

Because all of the shortcuts taken to get to the end of the plot, the entire movie seems much more contrived than the book did; Murtagh "just happened" to know how to get to the Varden, the secret rebel group that Eragon has to join, Brom knew that Eragon was the new Dragon Rider before ever seeing Saphira, and Ajihad knew that Murtagh was the son of Morzan, an evil Dragon Rider who died years before Eragon takes place. At the end of the movie, Arya returns to her home and to her people, riding with an escort carrying standards bearing her shield device, despite the fact that she is a member of an underground resistance movement and is supposed to be hiding from the government.

Rachel Weisz's Saphira was just annoying. Weisz had bad dialogue, and wasn't able to make into anything more. Because Saphira only ever communicated through thoughts, and sometimes opened and closed her mouth while "speaking," to Eragon, all of her lines appear dubbed in. Fangmeier didn't seem to think of Saphira as a true character; she never does anything but spout "wisdom" and fly around. She has lines like, "When we are truly one, you will be able to fly from anywhere, even my tail." Even these problems could have been forgiven if the action scenes and CGI had been better, but even these were not up to par. The action scenes all seemed too contrived, including the final battle at the end between the Varden and Durza's army (interestingly enough, Eragon's line "We fight as one!" from the trailer did not refer to him and the Varden, rather just to him and Saphira), and most of them were too short to be good, such as the scene in which Eragon first uses his magic. The CGI was all but wasted on Saphira; she did look good, but a lot of the detail was not necessary given low quality of the rest of the movie, and the effort on her could have been better spent somewhere else.

Review by Rheingold from the Internet Movie Database.