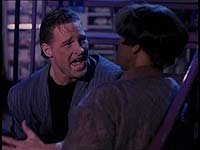 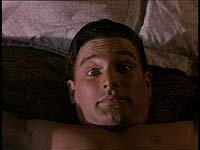 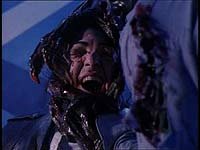 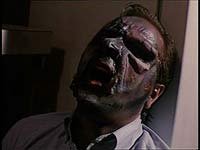 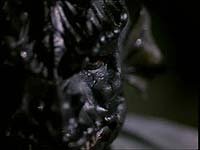 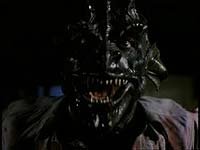 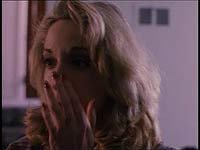 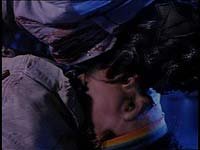 Watching someone's incompetence can be entertaining. Now the question falls down to intentional or unintentional? The low-budget indie comedy-horror "SHADOW CREATURE" obviously wants be a parody on shoddy filmmaking. What starts off amusing enough eventually grows tiresome in its witless try hard attempts of wanting to make you laugh than naturally letting it fall into place. In the end it becomes what it's mocking and in doing so it gives this tackiness an unwanted polish. It's no Ed Wood production, because it simply lacked the sincere charm and naivety amongst the ineptness. If you want a comparison think more along the lines of John Landis' "SCHLOCK!", but for me less enjoyable.

In "SHADOW CREATURE" the acting is stilted; script is exaggeratedly awful, direction virtually non-existent and editing is just as messy as the daftly patchwork plot. I just found the execution very drab, therefore the supposed thrills is diluted due to the overplayed broadness of the wink attitude making it miss more so than it hit. At times it could be a drag if it wasn't focusing on its titular reptilian monster. Sometimes the delirious plot had too many unwanted distractions (corrupt mayor) getting in the way of the fun, when I just wanted some monster-on-the-loose carnage. Those moments are clumsily staged, but they look better thanks to nice gore FX involving icky, bubbling makeup effects. Usually that's not case with these types of films. Even the monster design (namely the impressive mask) comes off to a certain degree. Despite seeing it dressed in jeans and a long sleeve business shirt as it moves around like an ape swiping at its victims.

A hearty Shane Minor did have his moments as the reckless meathead of a detective who finds himself investigating a very unusual serial killer(?) case that sees a hair serum the cause of a genetic mutation that goes on a brutal rampage. His character sure did have a weak stomach, compared to everyone around him and the stifled way he delivered his lines added to the stupidity. Interesting to see Buffalo, New York masquerading as Cleveland, Ohio.

It can entertain in parts, just I expected a little bit more in the way of bad monster fun.