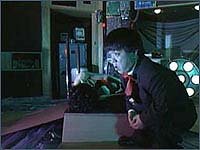 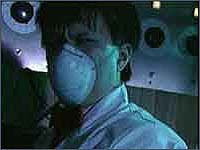 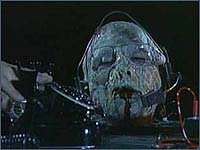 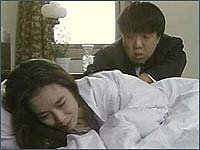 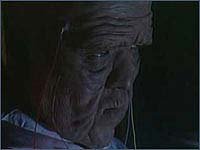 Android of Notre Dame: 410: Demented DNA dabbling dwarf seeks to cure ailing sister (her ailment isn't specified but I'm guessing Ali MacGraw disease as she becomes prettier the sicker she gets). He gets a living dead girl to experiment on from a blackmailing body procurer (Tomorowo Taguchi who has only one expression but it's a doozy and kind of reminds one of a Japanese Phil Hartman). Taguchi gets greedy, the living dead girl decomposes, the sister gets sicker and the dwarf goes to a bad place.

The script sometimes writes checks the FX can't cash (The legs and flying saw blade scene is particularly unconvincing) And the movie concentrates so much on the anatomical gross out it starts looking like an alien autopsy film. Yet an overall goofiness survives throughout.

Maybe it was the complete lack of humor (This is straightforward Poe style moralizing), the video quality that reminded me of a Canadian television movie, or the fact that after watching companion feature Devil's Experiment anything looks good but this little film wasn't all that bad.

Review by julian kennedy from the Internet Movie Database.