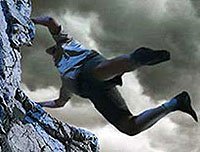 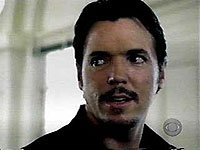 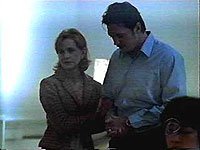 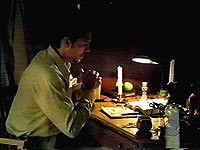 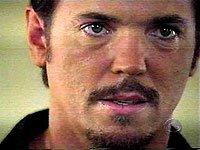 This is absolute garbage, unless it's some kind of subtle parody of the entire disaster film genre. If the latter were true, I'd submit that it's a little TOO subtle. Pretty much every scene, especially during the second half, fails on multiple levels.

I didn't realize that this was a sequel, though that explains my extreme confusion at the start of the piece when a rapid succession of events and locations made me wonder if I'd grabbed a copy of the "Reader's Digest" version of the film or had somehow started the second half of it and was watching a recap. It was so confusing that I went back to the DVD menu to see which half of the thing I started watching.

There're some good actors in this, as well as actors capable of more than they're often handed (Randy Quaid, for example), but there're also some whose acting skills I doubt; I've never really admired Shannen Doherty's thespian skills and some of the interchangeable-but-mostly-good-looking younger cast members likely belong to the "I'm pretty, so I'll be an actor" school of performance art. Even the best actors aboard this piece, including seasoned veterans like Tom Skerrit, Robert Wagner, and James Brolin, couldn't save the day. After a while, toward the end (finally!) of proceedings, I began to drift away with eyes wide open, realizing that I'd missed exactly who was dispatched by tornadoes and realizing simultaneously that I didn't care any more.

I'm a scientist but I'm not a climate scientist. My knowledge of severe weather events falls pretty much into the general knowledge category, with some extra edge provided by working around climate researchers, reading tidbits relevant to my research interests in coral reefs and fishes, and having endured a few hurricanes because of exposure attendant to the nature of my research field. But even my minimal knowledge related to these kinds of weather events was offended by blatant errors in the script.

First, obviously, there's no such thing as a Category 7 (or even Category 6) hurricane. Sure, the way things are going we may well have to extend the scale that far, so perhaps we can give them this one. There is still no excuse for rattling on about a Category 6 tornado, though -- they don't come in categories. And, particularly offensive to me even when I'm NOT wearing my scientist hat, the alleged scientists on screen here should be completely ashamed for referring to 'data' as a singular, as in "that data" (the correct, and ONLY correct, form would be "those data"). It's a small point, perhaps, but it's indicative of the sloppiness that's apparent here. Such sloppiness totally contrasts this piece with a film like "Dante's Peak," that quite well captured the feel of a field research team and for the most part did its homework (thanks to technical advisers and to the director's long-term interest in geology). These actors better never let me catch them again saying such things as "that data." Any real scientist who ever deploys such an atrocity should similarly be punished severely, perhaps by forcing them to watch this dreck.

On the bright side, I did get to look at Gina Gershon for a while. In fact, looking at Gina Gershon -- generally a good idea -- will for me likely remain the most (only) memorable part of this entire production.

I'm willing to lay off the production values, especially the special effects, given the budget and timeframe constraints they obviously faced. For the most part, the special effects are well done and where they fail it's usually more as a result of the bad science or other inaccuracies involved, not the actual effects themselves. The annoying, gimmicky cinematography, undoubtedly intended to portray hyperkinetic action throughout (this film rarely pauses, obviously its creators never heard how the most important parts of music, among other things, are often found in or bolstered by the pauses), at least helps cover for the general lack of perceptible peril in half of the perilous scenes.

Also, there's lots of bright sunny weather for being in the middle of a gynormous weather event. And surprisingly little rain, as is sometimes the case, and what rain there is somehow manages to fall vertically during a hypothesized Category 7 hurricane. The most severe hurricane that I've endured (so far) had sustained winds of 120 mph and gusts up to 164 mph. There was talk of it still being a Category 4 when it struck (≥131 mph sustained), because the Weather Service's recording instruments were destroyed partway through, but it definitely was a good, solid Category 3. It's hard to keep a field scientist out of the field and, knowing that I was risking a Darwin Award, I was outside for a good chunk of the storm and (dodging all sorts of things that were flying about me and painfully aware of my fragility) videotaping the show. The force of that storm was such that I was able to do a handy Marcel Marceau leaning-into-the-wind impersonation with ease and peeking around the corners of buildings into the full force of the wind would not only snap my head back but really do a number on my eyes. Now, in this film we're supposedly talking about sustained wind speeds twice that and the actors are running around as if it was just a 50-mph breeze? And the rain's falling straight down, rather than coming in sideways like a billion bullets? Well, sure, I guess, in a universe in which a telephone pole affords protection form an incoming trailer home. Really, even if the science was right, this'd still be execrable simply because the writing's so dire.

It's also how amazing how unbelievably (literally -- as in being absolutely unbelievable) quickly this unprecedented storm dissolved in the wake of DC turning off its power. I'd say it was an anticlimax but, really, by this point it was just a mercy killing.

Review by Shane Paterson from the Internet Movie Database.