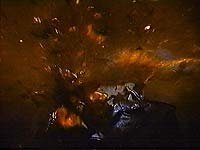 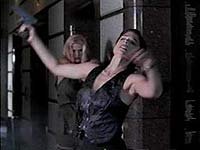 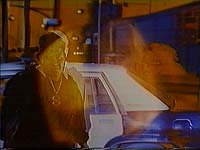 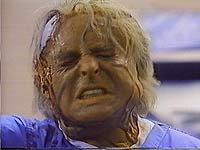 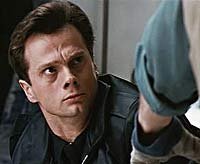 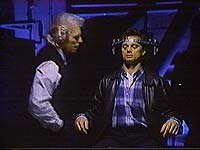 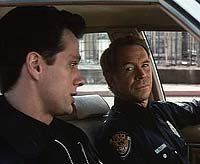 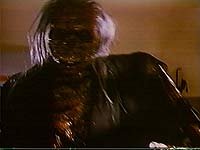 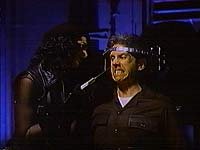 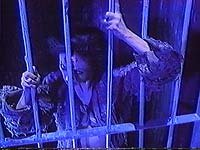 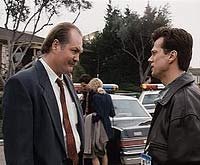 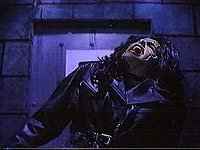 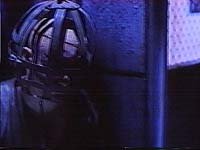 Scanner Cop starts in a grotty Los Angeles apartment block in a flat where a scanner has gone several days without Ephemerol & is going crazy from the pain, his son Samuel (Elan Rothschild) watches on as he screams & hallucinates. The apartment manager has called the police & they burst into the flat, in the ensuing incident Sam's Father is shot dead. Officer Peter Harrigan (Richard Grove) feels sorry for Samuel & together with his wife Margaret (Savannah Smith Boucher) decides to adopt him. Jump '15 Yaers Later' & Samuel Staziak (Daniel Quinn) is following in his adopted Father's footsteps & is now a Los Angeles police officer. Harrigan is now a Commander & is dealing with a worrying case, it seems random totally unconnected civilians are killing police officers for no apparent reason. Hospital orderly Damon Pratt (Gary Hudson) has stabbed officer Dooley (Wayne Grace) to death but appears to be in a comatose state & psychiatrist Dr. Joan Alden (Darlanne Fluegel) can't get anything from him. Harrigan has no choice but to ask his boy Samuel to stop taking his Ephemerol & scan Damon in an attempt to try & give them some clues to go on & stop the senseless killing...

Produced & directed by Pierre David this is technically the third sequel to David Cronenberg's original Scanners (1981), although this takes the the basic scanner element & tries to do something a little bit different. The script by John Bryant & George Saunders takes itself very seriously, moves along at a nice pace & is as much a thriller as it is horror. It's a surprisingly decent film with good character's, some nice scenes & overall the whole concept bizarrely works rather well. Samuel isn't presented as some sort of superhero & the film manages a nice balance between someone vulnerable with problems & someone with a unique gift which makes him powerful & frightening. On a disappointing note I didn't think there were enough exploding body parts, I mean the fabulous exploding head is the scene everyone remembers from the original (& the other two previous sequels as well I suppose but the original in particular) & it's equivalent here is very weak by comparison & seems to be there for the sake of it, blink & you'll miss it! I also didn't like the eventual reasoning behind the cop killings, just one single person out for revenge against one cop just felt far too small in scope & throughly routine.

Director David does a fine job, Scanner Cop isn't going to win any awards for artistic merit or anything like that but it's competently made throughout. He keeps the story quite tight & he keeps it moving along. The special make-up effects are not too bad but sort of average as we get some bulging veins, a few creatures & a scene where little faces pop out of someones forehead. The obligatory exploding head is less than spectacular & overall the gore level isn't that high.

Technically Scanner Cop is OK & it's generally well made. The acting was alright although Quinn looks a little nervous at times. There are a couple of familiar genre faces here, even though he is listed quite high in the opening credits Brion James appears for less than one minute, Aliens (1986) actor Mark Rolston is here, veteran Richard Lynch plays the villain & Hilary Shepard as his sidekick.

Scanner Cop isn't a half bad film, it's certainly better than a lot of low budget horrorthriller's that clutter video shop shelves. I think it's well worth a watch if this is your type of film & I personally prefer it to Cronenberg's dull as dishwater original. A sequel Scanner Cop II (1995) was made the following year.