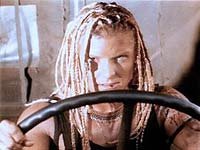 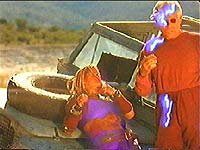 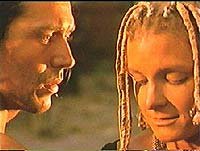 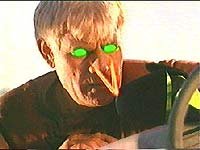 Third times a charm right?...right?!! well no. The plot continues somehow in this weird ass sci-fi action franchise. The first film was pretty unique and turned out to be a bit of a cult, the second film turned out to be a reasonable 'TerminatorPredator' rip off which had a nice rubber suit involved.

This time Pyun makes a film virtually out of flashback material from the previous two films, yet somehow he manages to nab his muse Tim Thomerson. Continuity is good for this series of films mainly because they were all shot back to back, almost, so at least the cast sticks around. The problem is you can clearly tell this is the arse end of filming from the second film and they've made a third out of it, the leftovers.

The plot follows on from the second film naturally (back to back remember) and simply sees Alex our muscly female heroine trying to regain her memory. This is the reason most of the film is flashbacks from the last film and rather dull, other than that there are more cyborgs on her tail yet again.

The effects are extremely basic this time, embarrassingly so. In short there aren't any real effects, its all very primitive looking superimposed digitally glowing electronic lights and dreadful looking blur effects that have all been added in post-production. It looks like something a student would achieve in school frankly, it all looks so hokey and cheap. Yet on the other hand they still manage some half decent explosions and vehicle action so there was some cash to use.

I think the reason this film feels so mundane is because you merely have human looking cyborg characters running around trying to kill everyone. Its not very exciting and the characters themselves look pretty crappy costume wise, I did miss the NebulaPredator hunter that's for sure. Pyun obviously likes sexy ladies if you haven't already guessed because the main two cyborgs are super slim fit females with trashy blonde wigs. Plus weightlifter Price gets her tight tanned ass out in the sun again with a very thin thong running between her hot buns. Was that a contractual obligation or something?

Its all very boring really this one, the worst bit about it is the fact it all looks the same in every shot, the same locations over and over. The second film was exactly the same locations wise too of course, so it really feels like a slog getting through this without the cool Nebula cyborg hunter. The only bit I quite liked was seeing Thomerson's human projection break up and seeing his real cyborg identity shine through underneath, (he's a cyborg hunter with a human imagecamouflage-like shield being projected around him). Its actually a neat little idea and the effect is probably the best in the film, his robotic glowing green eyes and scan lasers looked hilariously bad but a little creepy I guess.