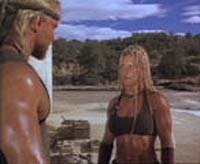 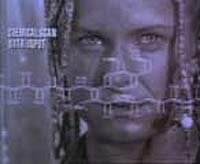 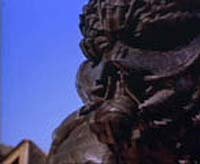 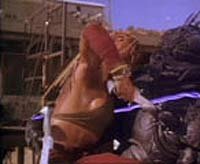 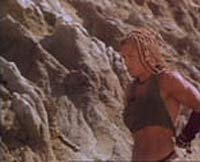 The original film is a bit of a cult classic in the B-movie genre, trashy sci-fi hokum that somehow just kinda works with its gritty low budget feel. This sequel is more of the same accept Mr Pyun merrily rips off two classic sci-fi films left right and centre.

Humans have developed a new DNA strain that could put a stop to the cyborg threat. Its injected into a pregnant female who then escapes back in time to Africa 1980. There she is killed by hunters but the child is saved and raised by natives.

Now comes the copyright infringements, the cyborgs send a killer cyborg back in time to terminate the child who is now a very muscular adult female with a great ass. So that's a certain sci-fi flick ripped right there, then for the duration of the film another sci-fi is ripped off completely as we follow this bounty hunter predator as it hunts this female. I might add this cyborg bounty hunter has its own light bending camouflage, it growls like an alien creature, it has some kind of body armour suit and mask, its own HUD in its mask giving it various tracking and voice analyzing tricks and it has its own shoulder mounted laser...ring any bells yet?

But that's not all, what really amazed me is it took around 12 minutes before we get to see the films title. It took a further 25 minutes before we even get a word of English out of the main heroine! the film is spoken entirely in a native African language (I think, could be gibberish) by everyone for a good chunk of the film. So basically I had no clue what was going on, guess that's why there is a bit of narration at the start and those handy bounty hunter screen readouts.

As we delve deeper into the film we are given plenty of running action, plenty of chase sequences, then more running, and some more, and yet more! Most of the latter half of the film is watching the heroine run for cover whilst explosions go off around her. There is some kind of plot involving treasure and some guerrilla type fighters but to be honest I'm not really sure what all that was about. The main plot seemed to be our muscle bound heroine running from the Predator rip- off creature. I've never seen so much running in a film! running from things getting blown up, so many buildings, so many missed shots by this so called top cyborg bounty hunter Nebula. All this and hardly any dialog I kid you not.

Anyway it all ends as you'd expect surprise surprise. Despite all this it actually looks OK in places, Pyun isn't too bad at slow motion high octane action, a low budget John Woo if you will. The location isn't too bad either really, meant to be Africa but filmed in the US, it does the job though, not too shabby. Its all utterly ludicrous of course, some of the back flips and somersaults through the air are insanely daft, and she firing a gun at the same time! Thing is the film starts off reasonably sensible but just sinks into this overblown over the top nonsense...still its somehow quite enjoyable. Sue Price all greased up as the lead heroine helps of course.