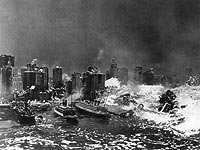 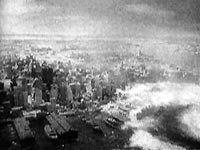 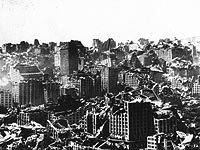 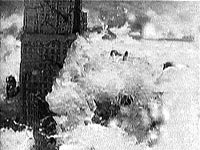 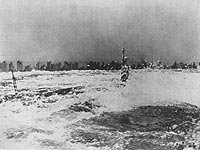 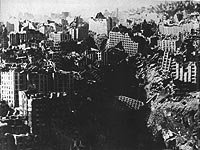 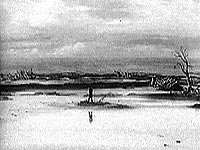 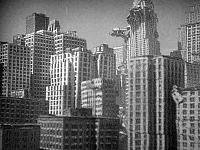 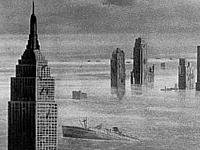 For a long time, I had read bits about this very strange early 'talkie film', and it did arouse my artistic curiosity. There was constant mention of DELUGE being another one of those "forever lost films", but a copy did (no pun intended) surface, and I finally was able to see this very early and interesting cinematic end-of the-world rarity.

The suspenseful beginning is genuinely scary, in spite of its preposterous science: Puzzled scientists discover that the world's weather is going through some pretty weird changes - and that a menacing global storm is brewing on the horizon. The writing and sincere acting makes it all seem quite credible and possible. But that's not all: Major earthquakes and massive floodings begin to mysteriously occur (Did a very young Irwin Allen ever see this?) - and the ocean levels start rising rapidly. (Was this an allegorical profecy of Global Warming?). I very much liked the "flaw"; being that no pseudo-scientific explanation for the disaster is offered. It adds that bizarre 'twilight zone' touch, where suspension of disbelief can drive you to questioning your own beliefs.

The whole world is thrown into a state-of-alarm as all air flights are grounded and shipping is haulted (Almost an eerie foreshadowing of 9/11). Then continents begin to sink into the ocean (though we only hear about it from chilling urgent news bulletins, which seems to ominously predate the 'This is only a Test' nuclear/scare broadcasts that began in the bleak paranoid 'McCarthy-Era' fifties).

The character focus then switches to an "average" married couple (Is there really such an animal?) as they flee to a grotto (confused as to why they'd go there to seek hopeful safety, but then this is a movie, where character, theme and riveting plot are the keynotes. Common sense can go to hell. Movies weren't really doing much different then than they are now). The radio broadcasts (this was way before the invention of that notorious tube) grimly instruct NYC residents to quickly evacuate as the overwhelming meteorlogical horrors approach. (As the film's logo states - EARTH IS DOOMED!).

Then comes the crucial scene that DELUGE earned its niches of historical film fame for - the tremendous earthquake capped by a gigantic tidal wave, that catastrophically destroys and buries New York under the vast ocean that has now blanketed most of the Earth. (Nothing like double-standards, isn't there?). Naturally, the simple yet oddly spectacular FX are dated, but nonetheless, I found them to be quite shuddery, and was able to suspend any trifling disbelief. Seeing NYC crumble as the earth rips open, with the almighty ocean pouring in, is quite scary on its own offbeat terms. (Can anyone pronounce "DEEP IMPACT" & "ARMEGEDDON"?). Back then, filmmakers were forced to rely on creative ingenuity and they utilized much imaginative resourcefulness and personal intimate touches which skillfully brought the nightmares up close and deeply personal. Any Questions?

My only main complaint is that all this harrowing mayhem occurs within the first twenty minutes. I dig plots that immediately engage and moooooove, but this was stretching that storytelling ethic a bit too much. You could have easily (with tons of backbreaking and nerve-frazzling work) produced the entire film about the disasterous build-ups to THE END.

Obviously, that would have required a high-budget and expensive FX that were still in their infant but inspired level - but what a terrifying science-fiction horror thriller it could have been! I honestly have doubts that todays upgraded technical FX would have that personal creepiness that this admirable effort fearfully evokes in its dark foreboding ways. Also, the "updated" script would undoubtably be crammed with stupid cliched dialogue and one-dimensional sterotyped characters you couldn't care less about.

Later, Republic Studios purchased DELUGE for that ruthless purpose of using the destruction scene for seriel and B-movie stock footage; which hence accounts for the film' "loss". They most likely threw the rest of the footage into the can, clever boys.

Unfortunately, the rest of the story is about the fate of a handful of survivors, struggling to live-as-best on a small portion of land that was spared the great plunge. We have a gang of violent renegades out to make hell for the heros (That's what heros are there for), as well as raping and murdering the women, which happens offscreen, making its repelling inferences that much more ugly. This was still brutally daring for the early 3O's, but this was also back in that so-called pre-code era.

Most impressive character was the gorgeous swimmer played by the equally gorgeous Peggy Shannon, who, sad to say, died untimely a few years later from acute alcoholism. Her atypical (especially for the time) character might interest feminists, for she excellently portrays an attractive young adventuresome woman who is also tough enough to hold her own - quite ahead of the time. (Can anyone say Anne Heche?).

The conclusion, though, was not that usual formulaic happy ending, obviously made to make you think - and that can be quite disturbing sometimes. I urge, particularily film historians or anyone interested in Hollywood's very first end-of-the-world movie, to give this strange early science-fiction effort a wild, reverent look.

Review by danm99 from the Internet Movie Database.