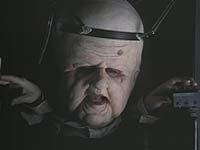 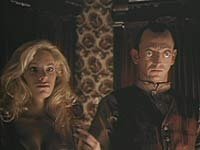 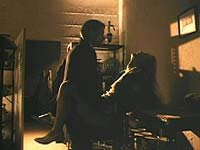 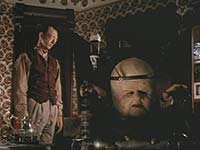 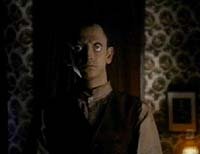 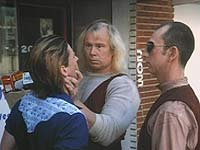 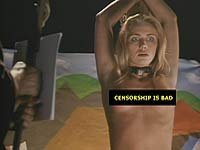 "Head of the Family" is one of the best of the Full Moon horror films.

On a street in an unassuming neighborhood, a family of freaks, Otis, (Bob Schott) Wheeler, (James Jones) and Ernestina, (Dianne Colazzo) lives that causes the others in the town to be paranoid of them. Loretta, (Jacqueline Lovell) a local, is secretly having an affair with bar owner Lance (Blake Bailey) over her boyfriend, Howard (Gordon Jennison Noice). While traveling one night, Loretta and Lance witness the family capturing a traveler and dragging him into their house. Doing a little digging, Lance learns that the family is a family of freaks that is run by Myron, (J.W. Perra) a giant head that wishes to have a normal body. Lance ends up blackmailing them into helping him get rid of Howard and giving him tons of money. Not wanting to become associated with him, Myron sends Otis and Wheeler to spy on him in case of a slip-up to end the deal. Loretta and Lance are captured and tortured into revealing his plans for the family. Loretta is forced into a play with the other victims of Myron's doing, until Otis comes to her rescue and is able to save her from the set being accidentally burned down.

The Good News: The real asset, or assets, to this film is the casting of Jacqueline Lovell. Not only is she a good looking actress, she also went topless three times in the film, including two for long periods of time. Also included in that was three more instances of full nudity in the film. She really was nude in at least thirty percent of her on-screen appearances. Also included was a member of the freak family going topless. There really was a lot of nudity in the film. What I also thought was original was that there was a completely original story that had hardly been seen in horror films. It is more of a pervert's movie and it is something new that I haven't seen in a while. Even though there wasn't a whole lot of special effects in the film, the ones that are seem pretty realistic. The giant head of Myron is plausibly done, and looks like something that could exist. The play set was pretty expensive. The designs of the freaks that they keep in the basement are very creepy and look threatening upon first glance.

The Final Verdict: With no nudity, this film would probably not be very well received. Still, this is a lot better than a lot of Full Moon films. It is more for perverts because of the high amount of nudity and violent acts, not violence, for Full Moon fans. All non-Full Moon fans will be bored stupid by the film.