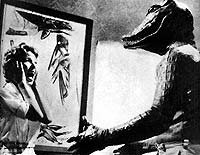 It's easy to ridicule a movie like this when you see a guy with a plastic alligator head running around. But that means ignoring its serious qualities on the other side, and these are really impressive for a B movie! First of all, the general atmosphere is well created. Beverly Garland as Joyce, used to the modern city life of the 1950s, arrives in the wilderness, scared of snakes and alligators, it's a bit like being shipwrecked on an alien planet. The horror develops not simply by action like alligator attacks, it's rather the strange swampland environment that causes fear. Cinematographer Karl Struss was responsible for masterpieces such as Rouben Mamoulian's 'Jekyll & Hyde' or Cecil B DeMille's 'Sign of the Cross', by the way. Quality work on the camera is no coincidence.

Secondly, the hostility of the people. Lon Chaney plays a maniacal loner, full of hate against 'gators' as well as people, he even attempts to rape Joyce in one scene. Also at the estate, Joyce does not receive the welcome she expected; her husband avoids her and his mother wants to send her back to the city on the next train. In fact, the only kind, well mannered person in the movie is the mad scientist who conducts experiments with radioactivity. The psychological set-up for the story works very well, even if let down by the special effects towards the end.

Maybe the surrounding narration with the 'true story' revealed under hypnosis is unnecessary, but other than that, this is a great B movie that stands out from the rest of its kind.

Review by unbrokenmetal from the Internet Movie Database.