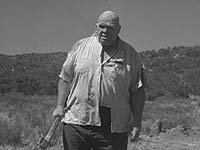 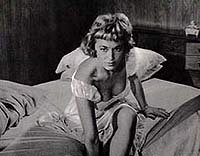 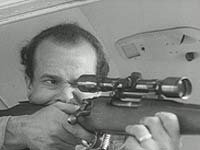 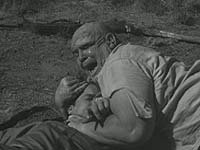 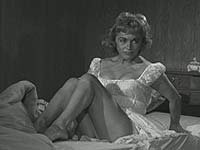 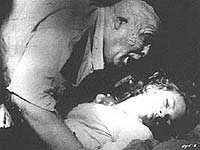 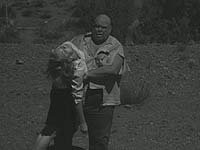 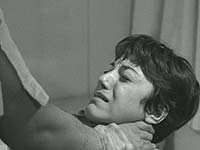 In my review of Red Zone Cuba, I called Coleman Francis the worst director in history, and said that watching one of his movies "is like watching paint dry in slow motion while getting a root canal in the lobby of the DMV." Now I come to his first (and worst) movie, The Beast of Yucca Flats. I want to start out by saying that this is hands down THE worst movie ever made. There is not a single minute that is watchable. Not a single frame that contains anything resembling excitement, humor, intelligence, or entertainment of any kind. It is a soul scarring vacuum, an experiment in how long a movie with no content can be stretched. Under no circumstances should it ever be watched by anyone, anywhere.

Moving right along, it stars the moronic Tor Jonson as a defecting Russian scientist who is attacked by the KGB and flees into the desert, where he is exposed to an atomic bomb test, which turns him into a mindless killer. He spends the rest of the movie wandering around, waving a big stick, and yelling "Ugh, ugh!" like a victim of severe mental retardation. He kills a woman, police mistake the father of a vacationing family for the killer, and they shoot him more than a dozen times, causing no lasting damage. The beast then goes charging after the family's two young sons, and at the last minute the cops arrive and shoot him to death. As he lies dying a bunny nuzzles his corpse.

That was the entire movie, except for a completely unrelated pre-title sequence. Now this would be the kind of plot you would expect from a five to ten minute home movie made by kids with an off the shelf camcorder, but Francis actually manages to drag this monstrosity out to 53 minutes. This may or may not be enough to qualify as a feature length film, but it's ten times the length this story deserves. Every scene is played out with glacial slowness, with there being many points where we stare at empty scenery, waiting for the actors to appear.

Everything else about this production is equally rotten. There is nothing that can be called acting. The star, Tor Johnson, has no spoken lines aside from grunts and mumbles, and only in one unscripted moment does his face betray anything akin to thought or emotion. The other actors aren't even real actors, just a family that got conned into appearing in this. Nor can they even be considered real characters.We never learn who they are, where they're from, where they're going, or anything else about them except that they are a family on vacation. It truly shows the writerdirector's utter lack of imagination that although they occupy a great deal of the runtime, and have major plot significance, they are no more developed than extras in a real movie.

Then there are the continuity issues. You might not think it possible for such a shoestring of a plot to have problems with continuity, but somehow it manages to. First there's the issue of the father's seeming immortality. We clearly see bullet after bullet rip into him, but the only affect is to make him stumble and wince in brief pain. Later in the movie his shirt doesn't even have any blood or bullet holes. Secondly, how did the cops know where to find the boys at the end, and how did they get there so fast? When they were shooting the boys' father, it was from a single engine plane. But when they confront the beast, it's on foot. When did they have time to land the plane and walk across miles of desert?

And then there's the aforementioned pre-title scene, in which a semi nude woman is strangled to death in her bedroom, and her corpse is possible abused. What the hell is it doing here!? It has no connection whatsoever to the rest of the movie. It's never mentioned by any of the characters. The killer (whose face we never see) looks kind of like the beast, but there's no place where the scene can fit into the main story. According to people who knew him, the director included it because "He liked topless scenes." Unbelievable, absolutely unbelievable! Has less thought ever gone into any production? And that's not even the worst part! The worst part is that in order to save money, the Beast of Yucca Flats was shot silent, with sound being added later- but no-one on this production knew how to sync the actors' lines to the movement of their mouths. So the characters only speak when they're facing away from the camera, off-screen, or off in the distance. In some shots the actors are actually filmed from the neck down.

I take it back, that's not the worst part. The worst part is the narration that was included to compensate for the sparse dialogue. Now cheesy, endless narration is pretty standard for low budget films like this, but here it's even more grating and pointless then the rest of the movie! None of what the narrator says sounds like anything that any person who has ever lived would ever say. It is composed almost entirely of buzzwords, repeating the terms 'science' and 'progress' until I wanted to strangle the narrator. Then there are bits that simply make no sense in any context, like "Flag on the moon, how did it get there?" What the bloody hell is he talking about? That has nothing to do with anything on screen. It's not even grammatically correct!

OK, rant over. I have to stop now because even describing this abomination is raising my blood pressure and giving me a headache. I will leave you by saying, for the love of all that is good, DO NOT WATCH THIS MOVIE!