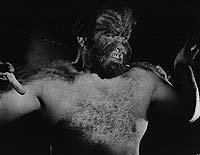 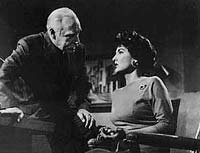 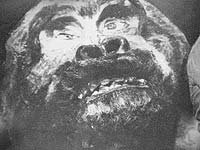 (There are Spoilers) John Carradine in one of his many mad scientist roles as the crazed Dr. Charles Conway who's obsessed with finding the elusive secret of the legendary Fountain of Youth. Getting people to be patients at his secret medical clinic deep in the woods and miles from civilization Dr. Conway plans to experiment with them to make his subjects perpetually young like the portrait of Doren Gray. In the end he turns them into horrible and deformed mutants cursed to live forever in a cloistered sanitarium, like leapers. Never to see the light of day because of their shocking deformities that he inflicted on them.

One evening an escaped convict Mark Huston, Myron Healey, is caught snooping around Dr. Conway's residence by his hulking and trusted servant Lobo, Tor Johnson. Dr. Conway sees the perfect specimen for his youth experiments with Huston in no position to run and go to the police for help since he himself is wanted for murder.

Dr. Conway also has a number of other people at his place one of them Harry Jedrow, Harry Fleer, who's suffering from what the good doctor did to him by being in a totally comatose state. It's Jedrow who in the end spells the doom of Dr. Conway and his insane experiments by having his sister, whom he wasn't supposed to have, insist on having him released. This lead Dr. Conway to get Lobo to bury the poor man alive who was later rescued by Huston when Lobo took a lunch break, the big guy gotta eat, from shoveling dirt over Jedrow's coffin.

Making a play for one of his patient's the beautiful Grace Thomas, Allison Hayes, has Dr. Conway's assistant the former 1946 Miss America Marilyn Buferd playing Dr. Sharon Gilchrist mad as hell and not about to take Dr. Conway's two-timing her anymore insisting that he use Miss. Thomas in his next experiment. Hoping that it will be as unsuccessful as the one he just had with Natalie Anders, Sally Todd a former Playboy Centerfold, who's face ended up looking like an over-baked pizza with extra cheese.

As usual Dr. Conway's plan to bring eternal youth into the world is doomed to failure since the magical 17th gland, that looks like a pickled jalapeño pepper, that's supposed to bring on the miracle of eternal youth only makes his subjects freeze in time looking like a cross between the Munchkins in the Wizard of Oz and Lon Cheney Jr in his role as the hairy Wolf Man.

With Huston now throwing off his cover and revealing himself to be police Let., not wanted escaped murderer, Mark Huston everything starts to unravel for Dr. Conway. Huston and fellow patient Danny Green, Authur Batanides, overpower the brutish Lobo with Danny losing his life in the process and the zombie-like Jedrow coming back from the grave to pay Dr. Conway back, in spades, for everything he did to him over the years.

Average 1950's horror movie with the so-called brilliant Dr. Conway flopping in every one of his experiments that had you, and the movie audience, wonder what was so brilliant about the crazy and arrogant kook in the first place. Tor Johnson's Lobo for once does have a few lines of dialog, which is very rare for him, notably the movies most quoted and remembered saying "Time Fahh Go Ta Bed".