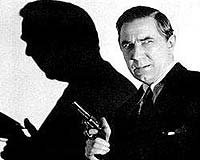 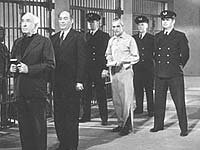 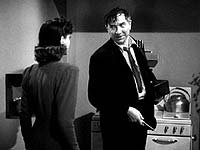 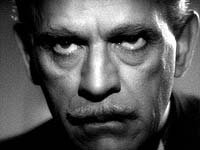 There are a lot of aspects about this fine film which are odd. Coming at the end of the first horror film cycle, it re-teamed Boris Karloff and Bela Lugosi, but they never shared a scene in the film. The character who was most interesting (actually two characters, literally welded into one) was Professor George Kingsley "Red" Cannon played by Stanley Ridges. The screenplay was partially written by Curt Siodmak, who would eventually return to the subject of brain surgery and transplanted brains (to far better effect, it must be admitted) in "Donavan's Brain". But that novel and film looked at the threat of unhampered capitalism in the hands of an evil man. That's not the case in "Black Friday", which touches on greed (a missing half a million dollars in 1940 dollars) but also looks at the struggle of personality - as appears in "Donavan'S Brain" as well.

Whatever was the reason that Boris and Bela did not share scene space (and jealousy can't be ruled out - Bela's feeling that Boris was too good a competitor in the area of horror films is well known), they don't appear together. It's hard to imagine how their characters, Dr. Ernest Sovak and gangster boss Eric Marnay, could have shared any scenes. Most likely they might have shared one if Marney tried to sabotage the brain transplant at the hospital (to make sure that Cannon dies) by threatening Sovak's daughter or by kidnapping the doctor. But the screenplay would have been radically different then.

There was one aspect of the film that was never fully affected in the production. When Marnay is captured by Cannon, he is shut in an airtight closet and locked in. We see Marnay yelling to be let out. Eventually we see him collapse and die. In the planning stages of the production Bela was supposed to be hypnotized into gradually looking weaker and weaker while being suffocated. The scheme did not work well on film. There are stills showing Bela undergoing hypnosis for the attempted treatment.

Siodmak is fascinated by the way certain personalities dominate. Warren Donavan's is strong enough (and his rejuvenated brain - thanks to Dr. Cory - even stronger) to take over the brains of Cory and of a greedy news photographer in that film (among others). Here Kingsley is a sweet old fellow - a close friend of Sovak - who has the misfortune of getting seriously injured in the assassination attack on Cannon. Cannon is a brutal creep, who thinks nothing about hurting anyone if it gets what he wants. It's the key role in the film, and Ridges was the right guy to get it.

Stanley Ridges was one of those actors who never disappointed you. In "Yellow Jack" he is this doctor working on the Yellow Fever cure, who when Henry Hull dies accidentally questions the logic and correctness of the experiment. It seems they had to give Yellow Fever to the subjects (volunteers) but accidentally Hull got infected and died. Ridges' scene is a brief one, but he actually hit the moral center of the movie - Hull's character, Dr. Lazear, was a widely gifted man. What was the gain to the world by the loss of someone like this due to this experiment? Another example (again based on history) was in "The Suwpect" with Charles Laughton. Based on the 1910 Crippen Case, Ridges plays the Scotland Yard Inspector (based on the real life Inspector Walter Dew) who realized that the death was no accident and pursued his quarry step by step. While not following Dew's success in catching Crippen, like Dew with the Doctor Ridges gets to sympathize with Laughton as a basically good man caught up in a nightmare. Laughton was a super-actor, and only one of his own type could come off well with him.

Ridges could play villains. He is Ronald Colman's cynical friend in "If I Were King" who sees the conflict with Charles the Bold against Louis XI as an opportunity to loot Paris (while Colman would save Paris). He could play sympathetic losers, as in "The Scoundrel", as Noel Coward's rival over a woman. He could play anything.

He delineates his two roles perfectly, to the point that they seem to be two men (even his features get younger as Cannon). Kingsbury, a charming fellow in the script, gets progressively more and more confused at the personality switches - reassured by Sovac it is part of his recovery. But every time he hears heavy bell ringing (did Siodmak think of Pavlov's dog experiment?) he changes into the bullying Cannon. Ironically it is Cannon who deservedly gets shot in the end, but poor Kingsbury who dies wondering why he was shot.