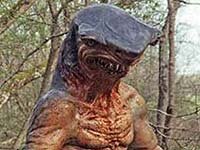 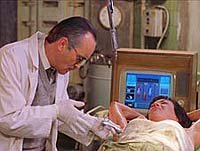 Where the hell are all these uncharted islands where prehistoric monsters lurk, evil doctors perform their experiments, madmen hold the ultimate karate championship, and the uber-rich hunt humans for sport? I had no idea there were still so many uncharted islands out there, but if you take into account the number of movies that utilize one of these mysterious islands as a location, you'd have to assume that there are at least 50 of these suckers out there. It always winds up feeling so damned convenient and I immediately deduct points from any movie that uses this hackneyed device. Hammerhead is the story of a mad scientist who is conducting experiments on one of these uncharted islands, so the movie already had a lot to make up for before it even began.

The island in this movie used to belong to Dr. Moreau, but has recently been purchased by the Re-Animator himself, Jeffrey Combs. Old Jeffrey is doing some kind of cutting edge stem cell research, which has led him to start working with sharks while searching for a cure for cancer. If that sounds familiar, that's because this is roughly the same basic set-up as the smart shark facility in Deep Blue Sea, not to mention a host of other Nu Image movies. So apparently, Jeffrey's son was dying of cancer which prompted our mad doctor to start experimenting on his progeny. He did some kind of super fancy gene splicing and so forth, turning his son into a shark-man.

William Forsythe leads a crew of unknown actors to the island to look into the doctor's experiments. If someone would have given him a sailor's hat, William would have been a dead ringer for the Skipper from Gilligan's Island. In typical Bond Villain fashion, the doctor decides that all of these intruders would make nice chum for his son. Not chums, like buddies... chum, like shark food. So enter shark-boy who starts stalking the Skipper and his cohorts all over the island. They, of course, make half-hearted attempts to escape and are thwarted over and over again while being chased by a guy in a rubber shark-man suit.

The movie didn't make up any of the points that it lost for taking place on one of those dastardly deserted islands. It's funny that this movie is called Hammerhead, it made me think of an old joke. Why do you hit yourself in the head with a hammer? Because it feels so good when you stop. That's pretty much how this movie is. The only reason to watch it is because it feels so good when it's over.

Review by ghoulieguru from the Internet Movie Database.