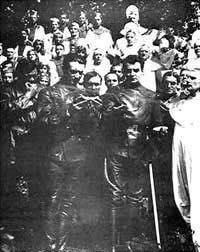 "For its time" is the big qualifier I'm applying to almost all the positive things I can say about "Himmelskibet", because, in my honest opinion, this movie's rather clumsily tackled themes and naive, overly saccharine messages have not aged very gracefully at all.

The number one problem here is the portrayal of the alien race and their civilization. Instead of awing the viewer with the strangeness of an alien world, or challenging our earthly views and beliefs by having them clash with otherworldly philosophies, the makers opted for a community of both visually and societally very mundanely human people, who we are still meant to perceive as vastly superior beings based solely on the fact that they've managed to transcend violent conflict. While this may indeed be a very advanced notion, this warless society is still portrayed as so primitive, so superstitious and so tribally ritualistic, that it simply fails to make the aliens seem truly above us earthlings. They come off like pacifist, primitivist cultists in ancient Greek attire. Not only is this rather boring from a sci-fi perspective, but it also makes it painfully obvious that this alien race serves nothing but a purpose and one purpose only: To be a vehicle for a blunt anti- warpro-tolerance message.

Moving on. One thing I definitely did like was the complexity of the story. There are many minor character developments and conflicts contributing to the whole (professional jealousy, for example, and a mutiny on the ship), rather than just one thick main plot thread, which is pretty unique for a movie of this vintage. Another thing is the overly expressive, theatrical acting performances that are so typical of the silent era, which I've always enjoyed. In this regard, "Himmelskibet" certainly delivers. The bad guys are characterized by dramatically evil mannerisms, while the good guys strike heroic poses and gaze wistfully at the sky. It conveys the moods and characterizations without any dialogue and is a lot of fun to watch.

In closing, I can only urge everyone with even the slightest bit of interest in movie history to give this one a chance. You might enjoy it for the beautiful black&white photography and the interesting (albeit extremely rare) special effects, and you'll spot many (then novel) themes and ideas, which would later become staples, even clichés of the genre. However, those of you, who want a good, classic science fiction movie that has stood the test of time, are probably best advised to look elsewhere.

Review by Roddenhyzer from the Internet Movie Database.