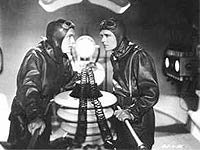 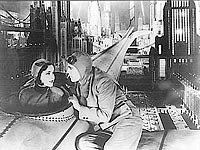 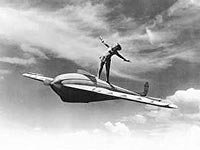 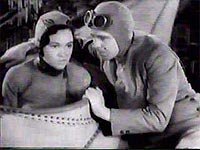 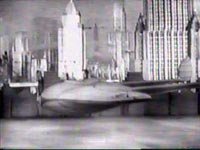 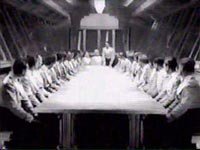 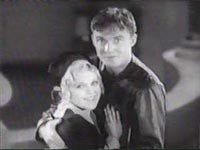 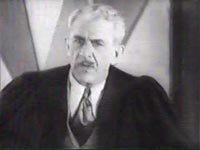 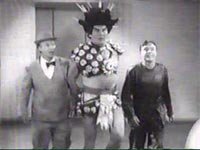 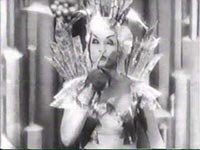 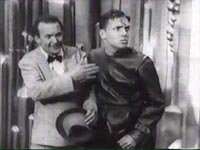 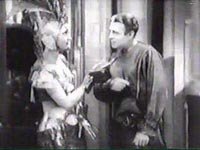 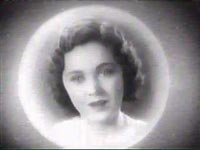 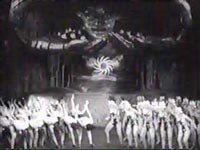 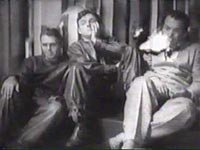 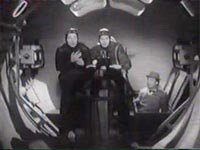 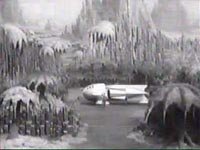 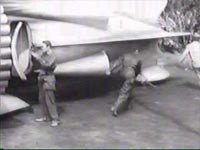 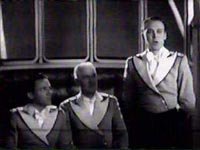 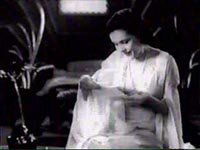 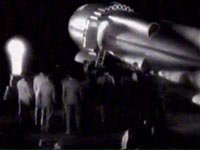 It's a little bit as though someone decided to produce Fritz Lang's Metropolis as a Ziegfeld musical revue, with even more evil twins. Add in a few dollops of ethnic humor, gay jokes, martians, futuristic gadgets, and prohibition snark - and now we've got a MOVIE.

The plot centers on young lovers caught in a bureaucratic love triangle, set fifty years in the future. LN-18 (Maureen O'Sullivan) and J-21 (John Garrick) are in love, but J-21's application to marry her has been blocked by another suitor. The marriage tribunal finds in favor of a distinguished fellow called MT-3, who is played by someone not very memorable. I wish Edward Everett Horton had been cast in this role instead, but I feel that way about most movies.

Our hero has filed an appeal, which means that he has four months make himself more impressive to the tribunal. I am also in favor of this, because the movie becomes fairly slow by the 40-minute mark, and could use some derring-do.

Instead there will be a sentimental musical number. Alas. I should also mention the side plots involving J-21's buddies at this point. RT-42 (Frank Albertson) is the smart-alec best friend, and he is accordingly in love with D-6, played by Marjorie White. She's the brassy gal pal of LN-18 - and provides some much-needed pep when the love story collapses under the weight of it's own mushiness.

The main comic relief, as far as the movie is concerned, is provided by a fish-out-of-water character called Single-0. He is played by El Brendel, professional Swedish oaf. Elmer Brendel was actually born in the US, and started out as a professional German oaf, but the Great War made that schtick considerably less funny.

I was not aware that Swedish jokes were a Thing, but apparently he popularized the "yumpin' yiminy" school of vaudevillian humor. OllieSingle-0 has been brought back to life by the scientists of 1980, after being struck by lightening in 1930. The laboratory set is beautifully done, with excellent special effects. The scientists take no interest in Single-0's welfare after his successful resucitation, and so J-21 and RT-42 take him under their modern wings. 1980-style hijinks ensue, although with considerably less of the new wave music I remember from those days.

Single-0 manages to disrupt a secret tryst between J-21 and LN-18, but not before J gets out another lackluster song. The boys get thrown out. While J-21 is standing disconsolately on a bridge, he is approached by a shady character with an urgent proposition. A famous scientist needs someone bravedesperatesuicidal enough to make the first ever trip to Mars in a large tin can. J-21 is just the fella for the job. Soon J-21, RT-42, and a stowaway Single-0 are landing on a surprisingly habitable Mars. No protective gear necessary! They meet the Martian queen, Loo Loo (Joyzelle) and her majordomo, Loko (wrestler Ivan Linow). Using sign language, Loo Loo warns the adventurers of a mysterious danger. Loko flirts with Single-0, who quips, "She's not the queen -- he is!"

Oh, Single-0. It isn't long before this cozy gathering is broken up by a tribe of rival martians, who apparently are all the evil twins of Loo Loo, Loko, and the other peacful folk. The best part is that the battle is entirely fought by each martian against his or her own evil twin. Meanwhile, the evil queen Boo Boo cackles with real gusto. We waited years for talking films specifically so that we could hear this kind of evil laughter. And it was worth it. Joyzelle's unhinged shrieks remind me of the Black Lodge dopplegänger of Laura Palmer. The evil Martians kidnap the earthlings, with the specific intent of performing a large-scale dance number for them. An evil dance number. Before the peril becomes too perilous, our heroes make a narrow escape. In an unusal instance of forethought, they had actually prepped the rocketship for a quick take-off in case of emergencies. Who does that?

But time is running out for J-21 to make it back to New York to make his appeal to the marriage tribunal! Their ship has entered Earth's atmostphere, and is speeding across town -- but they need more time.

Luckily, D-6 can whip up the necessary 3 minutes worth of diversion by claiming that MT-3 is the father of her babies. Can I say again how much more Marjorie White I wanted in this movie? If she had played this scene against Edward Everett Horton, I would have nothing left to ask of this movie. J-21 arrives in the nick of time to win his appeal and his girl. He kisses LN-18. RT-42 kisses D-6. Single-0 makes eyes at Boko, whom they have brought back to earth as a proof of their exploits.The final punchline comes when Single-0 is approached by an elderly man, who calls him "Papa" and climbs upon his knee.

Review by justin_runyon from the Internet Movie Database.