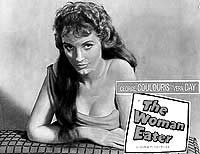 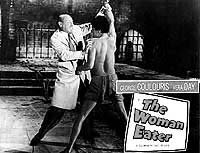 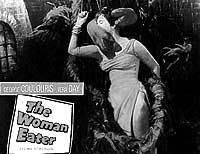 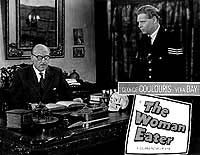 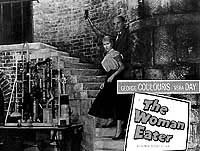 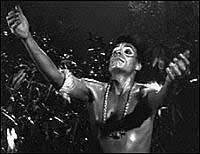 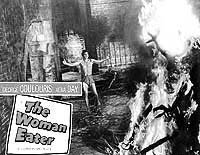 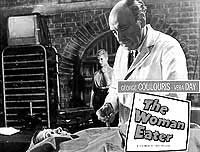 SPOILERS Before coming back to civilization from the uncivilized and unexplored Amazon jungle Dr. Moran, George Coulouris, came upon a secret that the local natives had all to themselves for generations, the restoration of life for the recently departed among us.

With his weird and creepy native drummer boy Tanga, Jimmy Vaughn, as well as an exotic plant that he brought back to the UK with him Dr. Moran created the same conditions for the secret native ceremony that he learned in the Amazon jungle from the locals in his basement laboratory to bring the dead back to life. With this the egotistical Dr. Moran planned to become the greatest man in the history of scientific and biological research that the world has even known and all the fame and riches and power that goes along with it.

Now five years later with everything is ready for Dr. Moran's ground-breaking experiment to be tested all he needed was a human sacrifice for the flesh-eating tree and the only humans that the tree eats are well endowed young women needing them to get the tree to extract a secret serum that can give life to those that the serum is injected into.

Tanga goes and captured a young women outside Sara, Susan Curtis, to be given to the tree for lunch. After extracting the serum and injecting it into what looked like a skull in his laboratory the pulsometer. The results showed that the serum wasn't enough for the tree to give the Doctor the jolt that he needed to bring back to life the dead-head that he had in the jar. Soon another unexpected complication arose for Dr. Moran when the young and buxom Sally Norton, Vera Day, came looking for a job at his home as a housekeeper. That didn't go too well with Dr. Moran's long-time housekeeper and lover Margaret, Joyce Gregg, who now has to compete with the much younger and far more attractive Sally for the doctor's affections.

Although obsessed with his findings in life-after-death studies Dr. Moran let his amorous emotions get in the way of his scientific curiosity. Dr. Moran fell madly in love with Sally and didn't use her for his experiment as food-stuff for the hungry tree which made Tanga very mad. It was later that he got into a fight with Margaret over Sally where he strangled her.

Kidnapping another young and will-built woman Judy, Joy Webster, at the local pub in town for the trees unquenchable appetite the serum is ready for Dr. Moran to see if he can bring the dead Margaret back to life. To Dr. Moran' great shock an surprise he finds out when he brings Margaret back to the "living" that Tanga his supposedly loyal and faithful assistant played a dirty trick on him. Margaret's body was alive but her mind was brain-dead! As the gleeful Tanga tells Dr. Moran " The body for you. The brain for us".

Dr. Moran going berserk, with the knowledge that his experiments all these years were a bust, attacks Tanga and ends up with Tanga taking a knife out of his diaper and putting it in Dr. Moran's back. This happened after the doctor set the tree on fire. With that a crazed and despondent Tanga seeing his "God" destroyed he walks into the burning bush and together both go up in flames.

Inspired acting by both George Coulouris and Jimmy Vaughn lifted the movie up to the point where your interested in watching it especially that of Coulouris' Dr. Moran. Coulouris who did such a good job of acting insane during the movie that even the few times that he was supposed to be normal he came across as deranged.