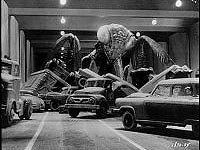 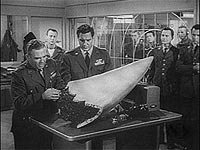 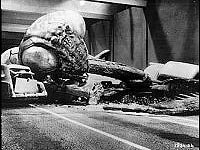 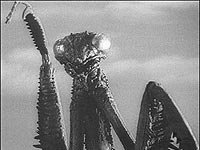 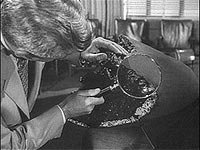 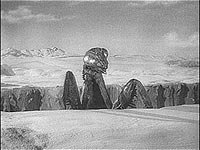 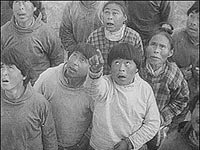 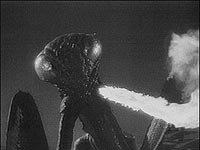 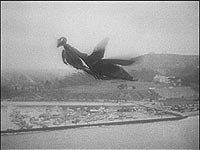 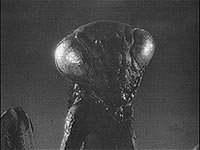 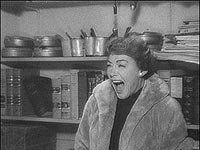 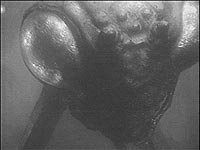 Yep so 1957 was most definitely the year of the big bug thriller movie, talk about over kill! After the huge success of 'Them!' in 1954 the genre was alive and kicking followed closely by the excellent 'Tarantula' in 1955. Since that explosion of insectoid goodness, studios at the time were systematically going through every known bug they could to make a horror sci-fi. Any bug that could be transformed into a huge slimy, fanged beastie was slapped up on the screen.

This third movie from the era (I think third?), as you can clearly tell, is all about the exploits of a giant Praying Mantis, cos they look scary right! A volcano erupts (as they frequently do in these films) which in turn causes the Polar region to shift and break apart, which in turn releases a giant Mantis that had been trapped in the ice for millions of years. Cue the Mantis running around and eating lots of stereotypical military types until it can be trapped and killed with extreme, yet polite, prejudice.

Now, far be it for me to take the pss too much, but...holy tentacles this was a fun flick! Yes that's right, you thought I was gonna sht all over it didn't you, well hold on. OK so the plot is ridiculous and virtually a carbon copy of every other big bug movie ever made. A natural disaster releases the monster bug or its the result of some kind of experiment, either or. From there on its the simple process of watching a predictable trio of, a good looking bloke, an attractive female and an old intelligent scientist type, discussing tactics to destroy the bug whilst others get eaten. Then eventually they manage to succeed but not before many innocent faceless people have perished, everyone's a winner.

The film initially starts out like a documentary for schools or some kind of news reel. It goes on for for at least 56 minutes about the military and how they are building this base in northern Canada with all these early warning barriers that cross the entire country. Its all your typical Cold war malarkey, in case the Ruskies attack via the Poles. But this intro goes on and on, I started to wonder if I had the right thing playing. Anyway the big question is of course how the hell did a giant Mantis get trapped in ice (or whatever it was before it was ice), at the Poles (where ever it was before it was the Poles), and manage to survive for millions of years. Although, I guess a bigger question would be, how the hell did a Mantis get to be giant in the first place.

The main attraction of this movie is of course the giant Mantis and the way the effects team created it. Overall its a bloody good rubber bug puppet and model combination, it actually looks like a genuinely real Mantis of epic proportions with all the correct details and shape. More importantly it looks quite scary and intimidating, it does actually lend some genuine scary atmosphere to the proceedings when it lurks in the background. A lot of that is down to the correct shape of the insect with its long, thin, pointy, jagged, sharp looking legs, the eerie sound it makes, and those two big silver emotionless eyes. The short sequences of the bug flying are also well realised, the only downside with this, and much like all giant bug movies, the bug roars like a flippin' dinosaur, or Godzilla. The best sequence on show has to be the quick scene where the Mantis climbs up the Washington Monument, that actually looks really good all things considered.

The movie takes on a very King Kong-esque approach as the Mantis eventually makes it way to New York, after fighting off some jet fighters along the way (ahem! copyright). To avoid a complete rip- off the big bug ends up crawling into the Manhattan Tunnel to recover, this in fact leads to a sequence where a group of blokes go in after the bug all dressed up in biohazard type suits. This one scene actually reminded me of many modern sci-fi movies. A group of characters all suited up in special outfits, creeping down a dark space with flashlights, all culminating in the heroic final group pose shot when they find the creature. This whole sequence was probably the slickest in the movie and gave it some real gravitas. Alas the ending lets everything down with such a weak clichéd display of male chauvinism as the male lead virtually bullies the female into kissing him...right next to the huge dead bug. Its like they just killed it, and that turned them on (or him), sadistic tendencies.

As always plenty of good and bad to be found, the small Eskimo village sequence is probably the daftest and most amusing. And I still can't work out how no one thinks to shoot this thing in the eyes, it has two huge silver eyes, shoot those surely, pretty sure that would stop it straight away. Anyway despite the odd little expected flaws this is still a solid bug flick and easily one of the best in my opinion.