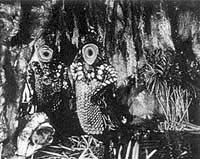 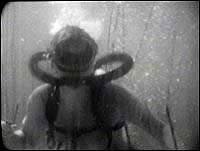 Corman, Corman, Corman. My real question has always been-who kept giving this guy money to make movies?! After they saw the first couple of films, the backers should have pulled out faster than a guy out of a syphilitic hooker. Instead, Corman had a long career of making total stinkers, like Attack of the Giant Leeches. And It Conquered the World. And Gunslinger. And many, many more. Each and every one guaranteed to be gray, bad, and cheaply made, with no more than a dozen people total in the cast, and that includes extras.

This one takes place in a backwoods swamp in Florida(I think, it might have been Arkansas, or Alabama, or any southern state, really). The local yokels are yakking in the grocery store, and one of them starts to pontificate in one of the corniest southern accents ever(and that's saying something) about a giant creature that he shot in the swamp while he was out poaching. Nobody believes him(big surprise). There's also a scene between the fat grocer and his beautiful younger wife, in which she declares her undying loathing for him.

Cut to a beefy blonde game warden, the usual smug pompous fifties 'hero' that populate so many of these awful movies. He's complaining because he can't catch a cold, let alone the local poachers. This guy's about as effective as a diaphragm full of holes. But of course he'll somehow find a way to save the day, at least for other chunky white guys with large jaws.

The poacher get attacked when he's out in his canoe, and gets dragged under the water. Then not much happens, until the grocer's wife and her lover meet at the edge of the swamp to have a tryst(wouldn't't that be a rather stinky, moist place to conduct an affair?). The grocer returns early, goes looking for his spouse, and threatens the pair with a gun. Beforew he can blow them away, they're jumped on by the very large leeches. Everyone(for everyone, read the local idiot sheriff) thinks that the grocer killed them and threw the bodies in the swamp.

Two more inbred hicks are pulled under while they're hunting for gator(one wishes heartily that the gators would hunt them, instead). The game warden begins to suspect that something other than the normal local wildlife is causing these attacks. After his father-in-law gets arrested for using the Charleton Heston Fish Locator(dynamite), the warden decides to use some scuba diving gear and start looking for the underwater cave that he's theorized must be where the bloodsuckers are taking their prey for an afternoon snack. That's when the 'giant leeches' start really appearing, although not clearly. They look like guys in plastic bag suits. They're almost as stupid looking as the giant Venusian carrot in It Conquered the World. Corman is a master of stupid looking monsters.

After he expressed reluctance to use dynamite to blow up the leeches earlier, the warden changes his mind with a vengeance. He uses about a ton of explosives, killing the leeches and all of the aquatic wildlife for miles in every direction. Thank you, Mr. Conservationist. Corman's reason for the giant leeches-the fact that NASA(I guess it is Florida, after all) used some atomic energy in their early experiments. Apparently, even a touch of atomic or nuclear radiation is enough to make normal people and animals grow to an enormous size. Why this is, and they don't just die from radiation poisoning, is beyond me. Anyhoo, that was the end of this moist, pointless, ridiculous saga of giant leeches-who really sucked. Heh, heh.

Review by Diana from the Internet Movie Database.