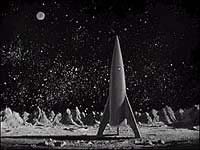 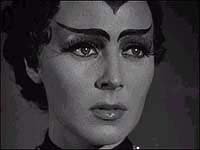 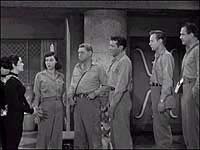 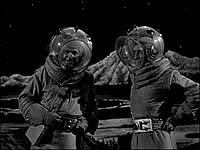 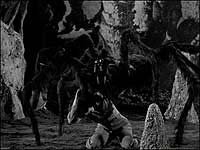 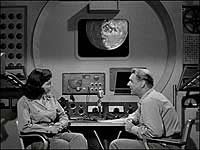 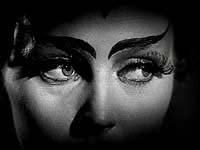 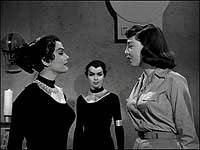 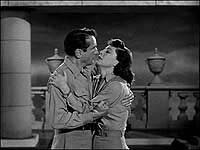 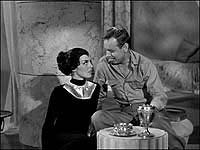 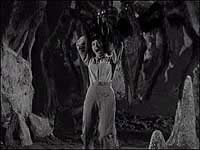 This is the movie where Jory and Marie Windsor are in love; he's in very fine shape, though perhaps just a bit put off by the undignified slapdash, yet at ease.

At 1st, I believed they supposed that the Moon had atmosphere and gravity, since the crew members could hear each other and were walking normally, there was the cigarette gimmick; but then it turns out they're surprised there's oxygen, atmosphere and gravity. Later, there's a scene with the sky with clouds.

The architecture on the Moon is ancient European, and Asian.

But the movie, meant occasionally humorous, is, despite three actors, in the hands of the cretins. And these cretins are worse than indifferent: they are wrong, and their minds are sleazy. The storyline has two ideas which could have worked: one is generic (the fight with the spiders), and it failed; the other one, the objects (the cigarettes, the gun, the box). Women are cats because they are sneaky. They also look like cabaret fetishist fantasies. The result of the travel to the Moon is that the Terrestrials loose the engineer, but murder all the Moon survivors. The story ends with the swiping out of the last Moon people. Greed and altruism alike lead to death. The matter of this tale is sleaze.

'Cat-Women ' is watchable, because it's moderately amusing, the actors save it (though Marie Windsor seemed to go with the bombast of the thing); the scenes in the Moon city are the less appealing. The producers tried to bluff it somehow, giving clumsiness as nonchalance. It's a bombastic movie, deprived of any emotion, an outing of uninspired hacks; and there's shamelessness in this absence of any affection or care for their movie. There's no thrill, no dramatic drive, no suspense whatsoever. The fact that the scenes, the dialogs are contrived has nothing to do with the budget. It's badly scripted and badly directed (but nicely acted and scored): the encounter with the giant spiders didn't need to look so ridiculous, and the cat-women themselves, and the seductions, and the ciphered dance. Because there are some silly inadvertence, some wish to attribute most of the movie to thoughtlessness; but this is to misinterpret the movie, which actually indulges in goofiness, in word-plays, etc.. Some things aren't errors, but meant to be amusing (the cigarettes, the gun and the box, which are funny, good for characterization (the copilot is brave and combative, the woman is addicted, unreliable, manipulated, vulnerable, the 3rd person is greedy and selfish), and later useful (the gimmick with the cigarette, the gun-play); Jory anxious to find out whom does Marie Windsor love). This might not be top humor, but shouldn't all be attributed to carelessness and stupidity.

Jory has a love scene with Marie Windsor.

It's also a cautionary tale. Tufts and the engineer fall prey to the crassest seduction, the pilot is practically degraded by his misconduct; and the one who wishes to be shown the golden cave is the most severely punished.

Review by Cristi_Ciopron from the Internet Movie Database.