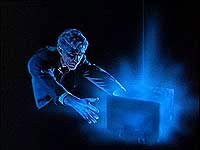 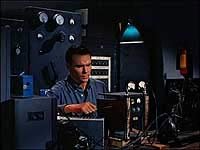 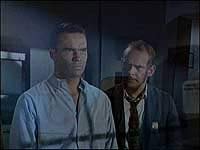 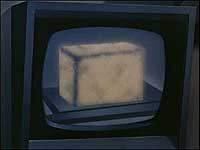 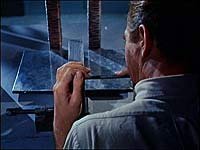 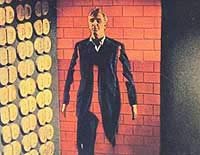 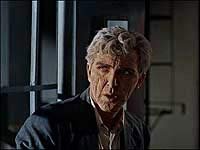 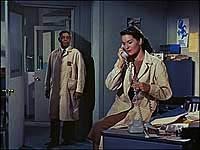 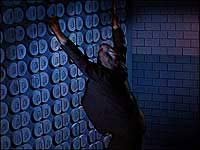 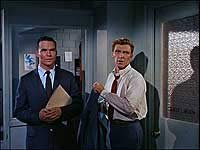 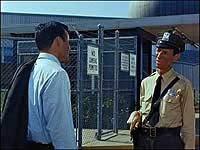 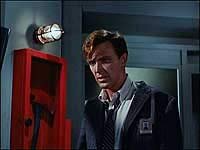 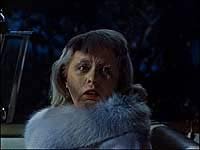 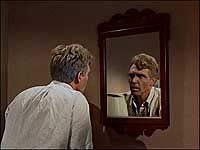 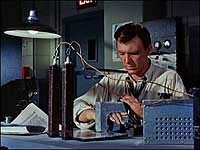 With the development, denotation and proliferation of atomic weaponry and the expansion of nuclear plants after World War Two 1950s sci-fi motion pictures were quick to capitalize on these events utilizing the neotericness and general unfamiliarity of ongoing atomic research as a basis for story ideas. In these films atomic testing was responsible for the revival of long extinct dinosaurs (BEAST FROM 20,000 FATHOMS and GODZILLA, KING OF THE MONSTERS), contact with nuclear radiation in a myriad of ways caused gigantic mutations in existing animal species (THEM!, TARANTULA, ATTACK OF THE CRAB MONSTERS and BEGINNING OF THE END) as well as in human beings (THE CYCLOPS, THE AMAZING COLOSSAL MAN, ATTACK OF THE 50 FOOT WOMAN, WAR OF THE COLOSSAL BEAST and THE 30 FOOT BRIDE OF CANDY ROCK) and in one instance exposure to a radioactive mist caused a man to dwindle to microscopic dimensions (THE INCREDIBLE SHRINKING MAN).

Atomic research obviously involved much more than the creation of more potent and lethal forces of destruction through nuclear fission and 4D MAN was one of a handful of 1950s sci-fi films to present movie audiences with some idea of just what went on in such scientific facilities touching upon other explorative aspects of quantum physics such as bombarding elements with subatomic particles and experimentation with intensified electromagnetic fields.

4D MAN was the second of three interesting projects produced by Jack H. Harris which included THE BLOB (1958) and DINOSAURUS! (1960) forming an imaginatively diverse and highly entertaining sci-fi trilogy. While not masterpieces of the genre these Jack H. Harris productions had the important distinction of being filmed in colour which was contrary to the trend of photographing the majority of sci-fi B-films of the period in black and white.

Much of this film's basic story structure can be traced to Lambert Hillyer's THE INVISIBLE RAY (1936) where Boris Karloff as Professor Janos Rukh becomes contaminated from being exposed to his discovery of the space-born element Radium X charging him with a fantastically deadly power (enabling Rukh to kill his scientist rivals by the mere touch of his hand) which steadily deteriorates his rational reasoning while also proving progressively fatal to him as well (this is kept in check by a periodic dosage of a temporary antidote).

Similarly Robert Lansing as physicist Scott Nelson in testing his younger brother's (Tony a renegade scientist of some disrepute) portable prototype contrivance in amplifying electromagnetic fields is able to move his hand through an impenetrable slab of metal. In successfully re-attempting the same feat within the force field again he discovers that the device has shorted-out yet he is now able to miraculously pass through any solid masses. Although not clearly delineated in the film his prior repeated exposure to the atomic furnace chambers in the development of a new dense alloy has caused an undetected mutation in Dr. Nelson's brain resulting in infinitely more intensified concentration faculties coupled with his also being affected by the experimental electromagnetic field now enabling Dr. Nelson to physically accelerate into the fourth dimension at will and whenever in this de-molecular condition he can freely walk through any physical barriers (walls, fences, doors, etc.). However while in this high velocity state Nelson also accelerates in age and by accident discovers he can only be restored to normalcy by draining the life energies of hapless victims resulting in a reign of terror until his eventual demise at the hands of his former scientist colleague-girlfriend in true "film noir" fashion by shooting Dr. Nelson (when not in his inter-dimensional form) as both are embraced in a passionate kiss.

The end is somewhat ambiguous as the apparently mortally wounded and dissipating Dr. Nelson (proclaiming himself "indestructible") retreats with some difficulty through a wall out-of-sight and the superimposed wording "The End" appears transforming into a visible question mark. This could imply a number of possibilities: A) Dr. Nelson died from the gunshot after disappearing into the wall remaining permanently embedded within it. B) Nelson could have successfully made his escape only to recover and return later to vengefully strike out at humanity anew. C) The artificially-induced fourth dimensional state could eventually be rediscovered and resurrected by some other researcher with similarly terrifying repercussions. D) What further unforeseen horrors is science on the brink of unleashing upon the world in the future?

Crucial to the plausibility and acceptance of this film's fantastic premise are convincing and competent special effects and the visuals employed in 4D MAN while all too sparse and fleeting are remarkably impressive nonetheless. Memorable is the scene where Dr. Nelson aimlessly strolls along a downtown street at night and mischievously applies his newly acquired powers by passing his hand through a mailbox removing a letter and properly replacing it through the slot (any solid object Nelson touches also de-solidifies), filching an apple through the front window of a produce store and similarly handling a diamond necklace on display in a jewellery shop. When Nelson pauses from his amusement and observes the darkened national bank across the street his smile betrays exactly what is on his mind (editing between the camera's point-of-view of the bank juxtaposed with the expression on Nelson's face wordlessly conveys his intention to make an unauthorized withdrawal). Sound is also utilized to considerable effect as a high-pitched electronic whine ominously signifies Dr. Nelson's transformation into the inter-dimensional entity. The age makeup of his victims whose life energies are absorbed by the desperate, deranged researcher is incredibly well handled indeed (particularly in the unintentional first murder of his physician friend where some cartoon animation is employed to dynamically accentuate the onslaught of rapid aging further making the effect all the more gruesome). With tremendous nightmarish impact the mummified corpses of his victims serve as a powerful testament to the frightening deadliness of this unstoppable and elusive killer on the prowl.

The late Robert Lansing was an curiously peculiar choice for the Jekyll-Hyde role but handily fulfilling the part's demands and his performance is an engaging, unique and refreshingly modernized interpretation of a stock horror film character. The actor's portrayal is as much a visual conception as it is a dramatic one which warrants a constant, studied scrutiny (witness how he perpetually has a lighted cigarette in hand and cleverly integrates his own habitual chain-smoking into his portrayal of Dr. Nelson). Through a facial expression, body movement or a hand gesture Mr. Lansing can convey his innermost thoughts, attitudes and feelings without the utterance of a single word a facility suitably appropriate for the visual demands of the cinema. Mr. Lansing also possessed a wonderfully expressive voice well capable of adroit, incisive delivery of dialogue when required so much so that the actor was recruited to handle the story's opening narration chores. For contrast the actor deliberately underplays his part so that his confrontational scenes where impassioned emotionalism is displayed (his frustration and anger exhibited over co-worker Linda's rejection of both his marriage proposal and pathetic amorous advances toward her, his pent up resentment directed against his callously exploitive and crassly unappreciative superior) noticeably stand out and make a stronger impression. Unfortunately in his film work Mr. Lansing was rarely involved with science fiction his most notable efforts being in television segments such as THE TWILIGHT ZONE (the unforgettable "The Long Morrow") and STAR TREK (the proposed spinoff pilot "Assignment Earth") and his was an enigmatic and charismatic personality which should have been utilized much more in the genre.

There is a matter of chronology regarding just when 4D MAN was actually filmed. In a minor part is the then child actress Patty Duke still years ahead of her academy award performance as a young Helen Keller in Arthur Penn's THE MIRACLE WORKER (1962) and as the teen-star of her own popular television series THE PATTY DUKE SHOW (1963-66). As Marjorie the daughter of Lee Meriwether's "landlady" Miss Duke appears to be between eight to ten years of age however 4D MAN was theatrically released on October 1959 and the budding young actress was thirteen years old at that time. Speculation would suggest that this Jack H. Harris production was clearly filmed a few years prior to its actual release (probably made in tandem with Mr. Harris's first sci-fi project THE BLOB which was filmed in 1957 and 4D MAN was originally intended as its co-feature) but for some undetermined reasons its premier would be postponed until Universal-International Pictures finally distributed the apparently shelved film in late 1959.

Most reviewers of 4D MAN seem unanimous in their dissatisfaction with film composer Ralph Carmichael's brash and vibrant jazz score having been utilized in a film of this nature however considering the time period (the late l950s) this energetic and rambunctious music is cannily suited to the more contemporary setting nicely expressing the strong underlying emotions, tensions and conflicts of the characters as well as accentuating the thrills and excitement of the action. Mr. Carmichael's jazz music appropriately imbues the events with the gritty texture of a police manhunt-dragnet drama and in contrast to the more conventional symphonic orchestrations employed for the majority of sci-fi movies at the time the traditional scoring seems rather trite and overly melodramatic by comparison. It's curious that a soundtrack album wasn't issued in conjunction with the film's release for aficionados of this brand of music. Mr. Carmichael was also responsible for the background music in Jack H. Harris's other sci-fi production THE BLOB.

Although certainly not the first, 4D MAN was reflective of a marked tendency in the late 1950s toward an increased sophistication and relevancy in themes and concepts advanced and explored in sci-fi films a trend which would be followed through well into the next decade. With tremendous strides made in technology, scientific research and the then fledgling space program the onus and challenge was now on for film makers to seek out new and different avenues for story ideas to reach a far more demanding and knowledgeable audience. Through efforts such as 4D MAN these imaginative craftsmen succeeded quite admirably.

Review by Morbius-13 from the Internet Movie Database.