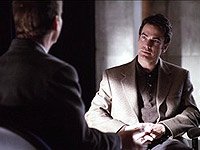 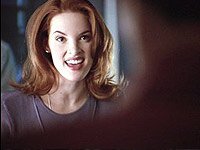 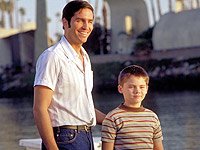 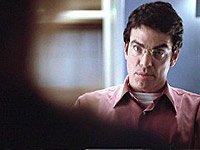 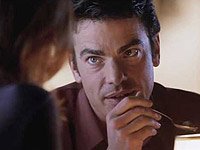 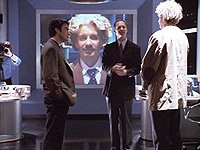 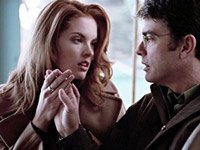 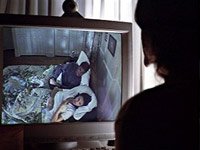 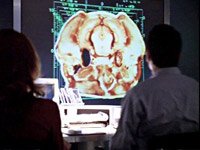 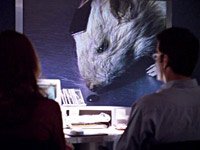 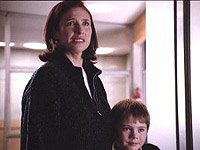 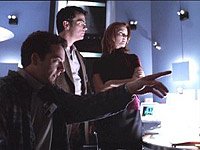 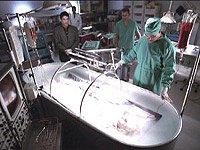 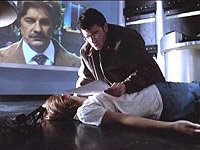 remember seeing this movie on TV a long time ago. I thought it was a good movie, based on the novel "Host" which is about a scientist working on AI (artificial intelligence) and making a conscious life form inside a computer.

Anyway I have never read the novel so can only go by the movie and what happens in that. The movie stars Peter Gallagher, as the scientist and Mimi Rogers as his long suffering wife Karen. Their marriage though stable isn't the best as he is a workaholic and spends more time at his work then with her and looking to her needs. While this strains their relationship they manage to stay together, until one day another person enters their life. The lovely Juliet played by Bridgette Wilson.

Juliet is dying of cancer and sees Joe Messenger's (Gallagher) work as a means to end her suffering. She worms her way into his lab and to find out how much progress they have made with creating life inside the computer. They get close while working and he has a brief fling with her but realizes that he would rather be with his wife after and tries to end the affair. Juliet in desperation breaks into the lab and downloads herself into the computer and then slowly starts to wreak havoc with the lives of Joe and his family.

OK this sounds really stupid, and for the most part it is but a lot of the movie deals with the characters and how they feel towards each other as the story moves on. How on Earth Ms Roger's character Karen puts up with this guy is beyond me. Juliet's one last wish was to have her body frozen in the hope she might be brought back to life one day.

This muddies the plot a bit because right in the middle of the movie her father makes an appearance played by Robert Vaughn and demands that she be given a burial instead, and a proper autopsy to see why she died. The coroner suspected it was more then just an aneurysm that she had collapsed from. So again to honor her wish they wangle their way past the legal needs of the coroner and he gets her head frozen.

The doofus takes her head home in a small freezing container and when that breaks down stuffs it into the freezer which is in the basement (where else) and later on while getting a replacement freezer machine for the head the wife finds the frozen head. The husband returns home to find her sitting with the head on the dining table. He argues with her and then she runs out into the front yard. They tussle over the head and then the wife flings it up into the air where the plastic sheet around it falls off the hair swirls around it and in slow motion it falls to the ground and then shatters into a million pieces as it hits the road outside of their house....

Meanwhile all this is going on the disembodied Juliet terrorizes both his family and the city while inside the computer. This doesn't last too long as the movie is near the end but not realizing it cyber Julie also dies because when she copied her brain into the computer she had also copied the aneurysm and that kills her off again, but this time for good..

And that's about it...... This movie good, certainly not Oscar material but it is interesting and deals with things I am fascinated in such as the nature and state of consciousness and other things related to that. It had actors I know and like and that too went a long way to me enjoying it. But it was more focused on the characters then the scifi nature of the story and that is why I think it worked.

Review by MuggySphere from the Internet Movie Database.