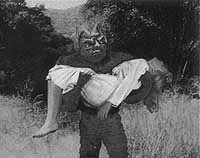 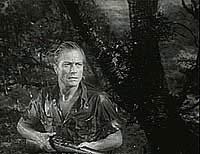 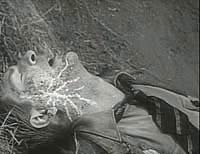 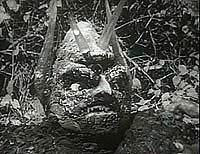 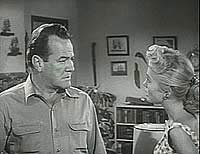 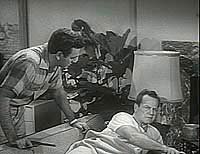 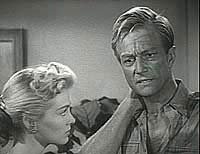 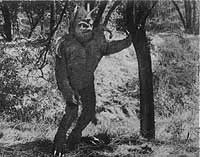 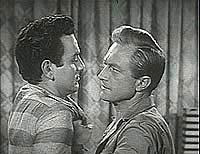 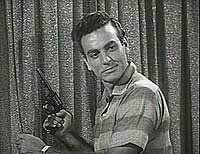 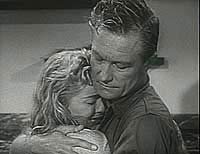 The Day the World Ended looks super cheap, but it is actually a watchable movie. It all begins with a nuclear holocaust. As poisonous radiation blankets the earth, only a few pockets are able to sustain normal life. The film is about one such pocket located somewhere in a mountainous desert probably in or near California.

A father and his daughter are hunkering down in their remote house, fully prepared to survive the nuclear winter. Five survivors straggle down from the nuclear fog-bound hills and make it to the house. There are seven people in the house, but only enough supplies for three (the father and daughter were expecting her fiancée to join them).

At this point, the movie becomes a great little character study. The small time hood and the hero, Rick (Richard Denning), compete for the affection of the daughter, Louise (Lori Nelson). An ex-stripper tries to hang onto her man while the father tries to keep everyone in line. The dying guy, surprisingly, does not die, but begins to have strange longings for the nuclear fog and strong cravings for raw meat. An old prospector and his mule round out the cast. The father can't get anyone on the radio, so these folks might be all alone in the world, trapped in a small house, surrounded by poisonous fog.

The sets are by far the worst part of the movie. The house looks like a Palm Springs vacation home rented out for the weekend. It just does not look like the father and daughter live here (for a guy who was planning to survive a nuclear war you'd think he would at least remember to trick out his house!). The decor is dull, which is bad because we spend most of the movie looking at it. Oh and the curtains! All the windows are curtained. The characters spend lots of time peering out of the curtains (but we never see what they are looking at), and they enter and leave through curtained doors too. It just looks really cheap.

If some of the scenes took place in another room, especially one with survival gear, the film might have been much more interesting. I felt like I needed to see what a 50s survival bunker (or storeroom) might have looked like. After all, it was not unheard of for people to have converted basements or backyard bunkers during this time period. Unfortunately the movie was too cheap to show something that really needed to be shown.

The most interesting plot dynamic involves Louise. She has been hoping for her fiancée to arrive at the house, but he does not. Her father urges her to forget about him (and marry Rick within the week and get busy repopulating the earth). But she is not ready. At odd times Louise hears a strange psychic piping noise that seems like a voice calling her (no one else hears it) and she feels she is being watched.

It's not too long before the household realizes there is a monster on the prowl outside. And the father and Rick start coming up with theories of humans and animals mutating into monsters due to radiation. I don't think the monster looks any worse than most cheap monster-suits of this genre. At least the monster is somewhat mysterious. The monster uses its psychic piping noise to lure Louise out of the house. Will she be taken by the monster into the poisonous fog? Will the monster let her go? Can Rick kill the monster and save the girl with an army surplus M-1 rifle? Whatever happened to the fiancée?

The theme of the movie is survival, but with an emphasis on letting go of the past, letting go of the dead, and finding love and reasons to live in the midst of catastrophe. The only survivors in the movie are those able to let go and embrace a new future as the poisonous nuclear fog dissipates.

Review by retrorocketx from the Internet Movie Database.