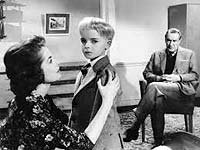 Sci-fi was never a great forte of the British film industry, although there were occasional exceptions. It was often left to Hollywood to make adaptations of works by classic British science fiction writers such as H.G. Wells ("The Invisible Man", "The War of the Worlds", "The Time Machine") and John Wyndham ("The Day of the Triffids"). "Village of the Damned", based upon Wyndham's "The Midwich Cuckoos" should also have been an American film, but MGM, who had acquired the film rights to the novel, shelved the project, fearing that the mysterious, unexplained pregnancies which form a vital part of the plot could be taken as a comment on the Christian doctrine of the Virgin Birth.

The film was therefore made in Britain after all, although by a German director, Wolf Rilla. It was shot on location in the village of Letchmore Heath, Hertfordshire, although the precise geographical coordinates given place the fictitious village of Midwich in Hampshire, just outside the real village of Woodmancott. (Letchmore Heath was frequently used as a film set due to its proximity to Elstree Studios).

As the movie opens, all of the inhabitants of the village suddenly fall unconscious. They regain consciousness some time later, seemingly unaffected, but after about two months all the women of childbearing age in the village are discovered to be pregnant. They all give birth on the same day to a strange set of children. Although these children are beautiful, with striking eyes and platinum-blonde hair, they grow up to be quite unlike normal children. They are physically and intellectually precocious, developing at a much faster rate than normal children. It becomes clear that they have telepathic bond with one another and the power to read the thoughts and control the minds of others. On the other hand they lack any normal human emotions including love and affection.

The leading character is Professor Gordon Zellaby, a scientist who lives in the village and whose wife Anthea is the mother of one of the children. Zellaby is summoned to a meeting with the Home Secretary and senior members of the Intelligence Service to discuss the children. Some of those present, including Zellaby's brother-in-law Alan Bernard, feel that the sinister children present a threat and should be destroyed, but Zellaby himself, who believes that their intellectual potential can be used for the good of mankind persuades the committee that they should be saved. The children are placed in a separate building where they will live and where Zellaby will act as their teacher. The experiment fails, however, as despite their intellectual prowess the children appear to lack any moral sense. After they use their powers to kill a number of villagers who have crossed them, even Zellaby is forced to conclude that they are evil and must be destroyed.

Whether the children actually are "evil", any more than a wild animal is evil, is debatable. To be evil one must understand the concept of morality but nevertheless deliberately act in an immoral way, whereas the children seem to have no conception of right and wrong. It is, however clear that they are hostile to humanity and represent a threat to it. Exactly where they come from is never made clear, but Wyndham's use of the word "Cuckoos" in his title implies that they are alien beings from another world, seeking to take over the Earth in the same way as a cuckoo takes over other birds' nests. One of the things that makes the film so unnerving is that these creatures take the form of human children, normally a symbol of innocence.

A sequel, "Children of the Damned", followed in 1963, but I have never rated it as highly as the original film. "Children of the Damned" appears to have been made as an allegorical film of ideas, but it is so muddled that whatever message it may contain goes missing somewhere along the way. "Village of the Damned", by contrast, is simply a science fiction thriller. It was made on a small budget with only one established star, George Sanders, in the cast. (Barbara Shelley, who plays Anthea, was later to become famous as a Hammer "scream queen"). There are no special effects other than the glowing eyes of the children. And yet it has become a classic of the British cinema, and in my view the greatest British science-fiction film ever. (Probably its nearest rival would be "Quest for Love", also based upon a Wyndham story).

At only 77 minutes the running time is very short, even by the standards of low-budget British movies from the early sixties. This concision, however, is precisely part of what makes the film so good. The story moves at a brisk pace and develops clearly and logically, with a growing sense of tension and urgency. The final, unbearably tense, scene, is a great directorial set-piece worthy of Alfred Hitchcock. This is perhaps the film that Hitchcock would have made had he turned his attention to sci-fi.