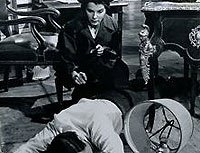 While "Face of Terror" ("La Cara del Terror") looks like a crappy Spanish horror movie on the surface, it's really very well made and the dubbing is pretty amazing. And, it's well worth seeing.

When the story begins, Dr. Taylor (Fernando Rey) approaches the board of directors at the hospital, asking permission to try out a radical new type of plastic surgery...using actual plastic and using it to rebuild the faces of badly disfigured people. Oddly, the board rejects his proposal so he decides to continue his work on his own. Soon, a badly disfigured woman arrives....telling Taylor she knew about his work and begging him to help her. Naturally, he's filled with compassion and performs surgery on her and incorporates his new secret formula.

What the nice doctor doesn't realize, however, is that Norma (Lisa Gaye) is actually an escaped and dangerous mental patient from the hospital. And, after completing the surgery and having outstanding results (she's now very beautiful), he learns the truth and insists she return to the hospital. However, she's afraid and conks him on the head....making her escape. Soon Norma has found a job and appears to be trying to create a normal life for herself. But being beautiful offers its own obstacles and soon she's being sexually harassed and ends up killing the pig. But this isn't her last killing.

I really liked this film for quite a few reasons. First, although it was originally a Spanish language movie, it was very seamlessly converted to English. Most Spanish horror films of the era were horribly dubbed. But in this one, scenes with Taylor and Norma were re-shot with the actors speaking English and doing their own dubbing. As for the other characters, they also were dubbed very well and it wasn't the usual clumsy and distracting dubbing. Second, although Norma has some mental health issues, you CAN understand and even justify a couple of her killings...it's NOT a case of a maniac just killing folks. I also liked the ending. All in all, a surprisingly good and enjoyable film that defies so many of the expected stereotypes and cliches.