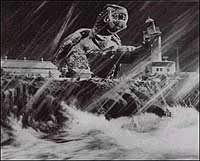 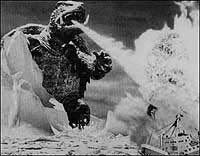 This production from Toho rival Daiei definitely does not compare to "Gojira", the high water mark among of all these Japanese monster movies; it doesn't have the same level of gravitas or panache. But that also doesn't mean that it's bad at all; it is pretty entertaining. Director Noriaki Yuasa creates some reasonably exciting action scenes. The acting from the main actors is good, but I watched the version where there are some hilariously awful thespians playing American bit parts. Tadashi Yamauchi composes a good music score, and the atmospheric black & white cinematography by Nobuo Munekawa likewise impresses. Best of all is Gamera itself, an interesting addition to the Japanese creature canon. It's well designed and performed in the best "man in a costume" tradition.

Representatives from a college are visiting an Eskimo community to dig up information on the legend of an enormous turtle named Gamera when the Arctic is disrupted by an A bomb test. This creates a great big crack in the ice from which Gamera emerges. And it's a bad ass: a fire breathing, jet propelled thing that lays waste to much of its surroundings. Individuals such as scientist Dr. Hidaka (Eiji Funakoshi), his assistant Kyoke Yamamoto (Harumi Kiritachi), and photographer Aoyagi (Junichiro Yamashiko) are among those who are witness to the events, and it's up to the dedicated Hidaka and his associates to devise the best way possible of dealing with this out of control menace.

Gamera is truly a force to be reckoned with here, as traditional weapons don't work against it; it seems to derive only sustenance from firepower. Finally, experts decide that a plan Z will be used. What this will involve should intrigue the viewer to some degree. Anyway, one hopes that this will work because it doesn't look like there will be any deus ex machina to help our heroes out. The main debit from this viewers' perspective is that annoying kid Toshio (Yoshiro Uchida) who keeps putting himself in danger because he's a turtle addict and is convinced that the big guy doesn't mean any harm. But overall this is still an amusing bit of escapism that is somewhat adult; the sequels, however, were decidedly more kid-friendly.

This is good entertainment for fans of this genre.