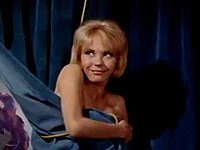 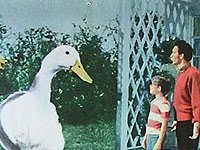 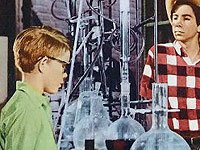 As mentioned in the summary line, "Village Of The Giants" has many of the elements of the live action Disney comedies of the early 60's: mildly bemused humor with a 'way out' attitude, safely toned down for the kiddies ("The Barefoot Executive"); teen gang dynamics romance, and dancing ("The Monkey's Uncle"); a magical chemical substance that breaks the laws of physics via cheesy process shots ("Flubber"); a juvenile genius ("The Computer Wore Tennis Shoes") and even Tommy Kirk (ex-Mousketeer and juvenile lead from many of the old Disney movies, by then in exile from The Magic Kingdom). My guess is that Bert I. Gordon, who tried his hand at many different genres (including fantasy, horror, and film noir)(all badly) decided to make a Disney film - only slightly hipper (music by the Beau Brummels, blonds in bikinis, drug jokes, etc) racier by 60's standards) and campier.

"Village" is intentionally camp and cheesy, all right. And it's even vaguely funny. Not "ha-ha" funny, but pothead funny - if you were stoned or drunk, you might get a mild chuckle out of the proceedings.

In its favor, "Giants" features some pretty nice eye candy in the form of the blond girl members of the 'bad' teen gang that comes to town to make trouble for "our" wholesome, law abiding teen gang. (This is speaking as a male, of course). They're pretty hot, if you like the Pam Anderson platinum blond go-go dancer type. They also dance real good. And the Beau Brummels contribute a couple of nice, lively pop songs that are much rawer and funkier than anything you would hear in a Disney film from that time.

Against: practically everything else. Beau Bridges eventually matured into a fine actor, but the movie tries to peddle him as a cool guy and a teen idol, which is ridiculous given his mole-like, opaque features, constipated expression and pale, flabby body. He has great hair and complexion, and that's it. Poor Tommy Kirk tries his best to carry the film as the teen 'hero' of the town, but at this point in his career, it was basically over for him. As a result, he tries too way hard and the movie makes him such a goody two shoes that you can't help but cheer when giant Beau backhands him for a loop. The special effects range from barely acceptable (a couple nice shots of the giant kids gathered on a theater stage) to ludicrously bad (the giant mannequin legs that Tommy breaks a chair against). The screenplay is completely brain dead even as it tries to veer from heavy handed irony to action to comedy, managing to be none of those things...not even good camp. I don't want to pick on the supporting cast, though, because the screenplay called for cardboard cutouts to go through the motions and allows none of the 'minor' members of the cast any room for something as evocative as actual 'acting'.

BTW, what was the deal with the red headed go-go dancer? Was it supposed to be sexy when she vibrates all over like a blender set on 'puree'? Was she supposed to be shaking her 'bippy'? It wasn't a go-go dance, it was a muscle control exhibition...!

OK, the movie is basically harmless. It's just really stupid, so stupid as to nullify even the 'camp' entertainment value. MST3K covered it in one of their later 'Sci-Fi' channel episodes, which is pretty funny. Go watch that one if you can, or don't.