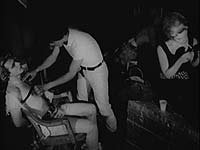 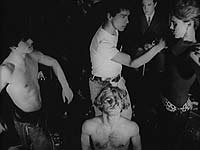 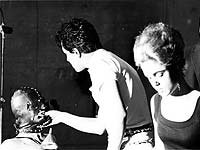 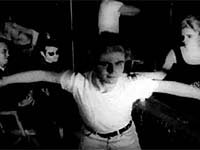 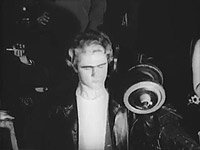 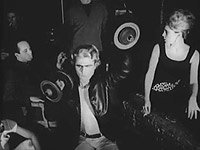 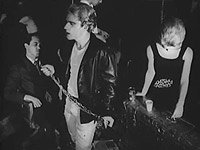 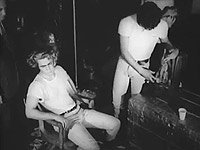 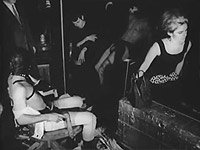 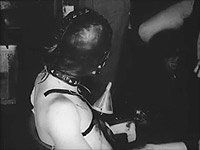 Vinyl is significant in it actually does, after the really, really mixed-bag of The Velvet Underground and Nico, show me that Warhol is somewhat serious about his craft as a filmmaker. It's daring as an experiment actually pays off, for the patient and willing viewer that is. Where-as Velvet took its camera cues from an epileptic monkey on amyls, Vinyl is more ambitious in its minimalist way. And as an adaptation of Clockwork Orange it's... only so close as to maybe reference street crime and being "bad" or "good" and signing your life away. If your looking for droogs, need not enter here you do.

Vinyl is, as Velvet was in all actuality and Sleep and Blow Job and Empire, all in 'one shot'. Curiously I never really saw the film change its cans, though maybe that was an editing trick (or maybe not, I'd have to see it again to be sure), but it all looks to be a movie 'in-camera' as it were. It's a kind of deranged classic of framing and composition. Warhol of course is open for improvisation- he doesn't seem like the kind of guy, on the opposite end of Kubrick ironically enough on this project- to do a lot of "takes". Just roll and let it happen. In that sense Warhol had a perverted sense of mixing documentary and fiction, or maybe as with Herzog the lines could blur. This is no way to compare the two filmmakers, but there you go I just did by accident.

So, the movie. It's about a, uh, I guess a street hoodlum who see the cops as "good" but doesn't want to be "good" and wants to rail against the fers. The film starts out on a shot of this man's face (played by a not-good-but-interesting actor Gerald Malanga) and pulls out to show the whole scene: a woman (Edie Sedgwick) on the right side, a 'doctor' or some authority figure on the left, and a few figures in the back. One of these figures, for at least the first half of the movie, is being tortured while standing up.

This makes for a morbidly funny picture as Malanga and Sedgwick dance not once but twice to Martha and the Vandella's fantastic "Nowhere to Run" (this is where Warhol has his best sense of play and fun, something that seems uncharacteristic but must have its moments). Then it goes on to have a 'story' of Victor (Malanga) being caught, brought in for the "treatment" of the Ludovico sort, though it's never called that here perhaps for copyright reasons, and then Victor proceeds to get tortured. Oh, and there's a Gimp in there too. And he's not sleeping.

Vinyl does entertain if one can get keyed into it. I was never particularly bored by this, and I have to give credit to Warhol, whether by actual direction or by accident, had a vision for where he wanted to go with the actors and the framing of his 'shot(s)'. It's all content and some style, as the actors move in and out of the frame and it barely changes once it makes its move down into its wide-angle position on all of the players for the movie. Another weird note is that Warhol didn't write the dialog that's given to the actors, many of whom are clearly not professionals by any stretch of the imagination. They even look like they're reading off of the newspapers and stuff they have in their hands, which gives the movie a kind of bizarre theatricality to it.

Vinyl takes a look at what few didn't realize was around at the time, if anyone outside the factory or small underground NYC theaters saw this, which is the culture or mentality of S&M and punishment, maybe for pleasure, maybe not. I have to wonder if it was all a put-on, and maybe it was. Warhol must have had a sick-puppy sense of humor, and it comes out here. Certainly I was laughing through a lot of it- maybe at it, but who knows, it is meant to be camp to an extent- and it succeeds on the level of actually being about "something". What that is fully, I don't know. Whatever themes it gleams off of Burgess' novel are very trivial; it could have been any book that's anti-authority and about a juvenile delinquent. The one thing separating it is its science fiction nature of torture and surrendering the body to "science" as it were.

I suppose as a recontamination it could go like this: If you have to see one Warhol movie in your life, it might as well be this one. But only if you despise things like cut-aways and montage. If you've also been looking for the longest-take-imaginable, it's here. If you're looking for a coherent adaptation of Burgess' novel... stick with Kubrick, even if he possibly, though not likely, ripped-off the opening shot of his film from Warhol's opening of this movie. Like it or not, its a deranged would-be master piece of single-shot filmmaking.

Review by MisterWhiplash from the Internet Movie Database.