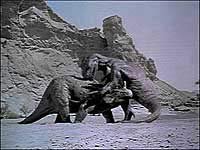 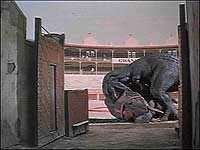 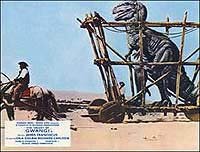 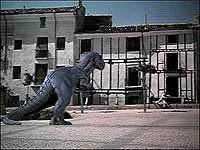 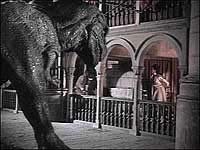 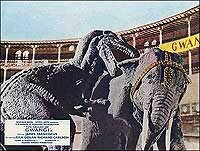 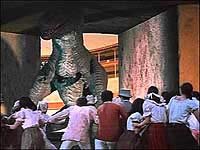 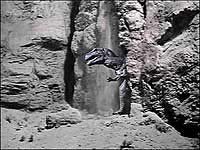 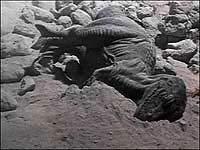 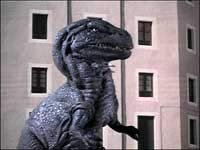 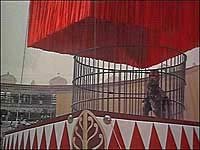 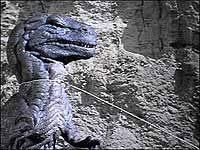 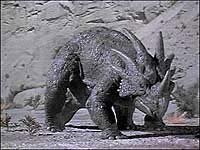 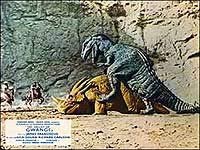 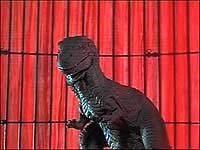 What saddens me about contemporary cinema is the way it has become so high tech that appreciation for the craft of Ray Harryhausen is all but lost on today's generation. Many young people watch this today and say the effects look flat or cheap. I dunno. I guess because I wasn't weaned on the 20-cuts-a-second editing style of MTV, I can still look at Harryhausen's effects and stand in awe. Rent the DVD for "Gwangi," watch the short documentary about how Harryhausen put the Tyrannosaurus roping sequence, and maybe you'll be in awe too. The thing I like about stop-motion animation is the surreal quality of its motion and the amount of work required to bring it to life. As fans, we know that these are models, manipulated painstakingly by hand, and when I was a kid the idea of some guy doing this for a living was amazing. It was like playing with toys, right?

I don't object to CGI today, but I must admit that because of the advances in the watching habits of young people, I find the multiple-cut editing style a bit obnoxious. With CGI, you over-edit because you can, because linear computer editing systems like Avid and Final Cut afford you that luxury (I'm still lost during sequences of EXTRAORDINARY GENTLEMEN because my eye can't follow fast enough). I prefer the slightly more static but nevertheless watchable action sequences of "Gwangi," which I can view again and again with awe.

I'll grant you, as a whole "Gwangi" has flaws. The overdubbing of Gila Golan is annoying. The direction of the actors and the camera is melodramatic. We have to wait 45 minutes into the film before we get any quality dinosaur action (but to the film's credit, the last 50 minutes are a rollercoaster ride). The problem with the script is that someone felt they had to actually write one, someone unfamiliar with the conventions of the genre, someone who didn't realize that less dialogue, characterization and plot development (all shoddy, by the way) and more dinosaur action was what was demanded by the target audience. The nice thing about the DVD, however, is you can skip all that stuff. Go on, be a kid, and fast-forward to the Forbidden Valley scenes. If you have any appreciation for the pre-CGI pioneers of special effects (without Harryhausen, there could be no Phil Tippett on THE EMPIRE STRIKES BACK), you will love this.

Review by Ichiro from the Internet Movie Database.