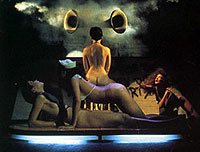 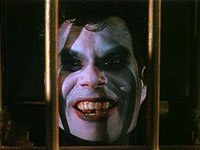 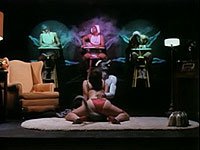 What makes this film so extraordinary is it tackles themes that are interesting beyond pornography that probably couldn't be expressed any other way. Mainly it's focus is on sexual frustration, but also inadequacy and betrayal are taken in.

The story follows a rag tag band of nuclear war survivors who can no longer make love. Sexual contact makes them feel violently sick (the negatives). A lucky few (the positives) are forced to perform sex acts on stage as entertainment for the negatives.

Enter Nick, a negative ex football star, and his negative girlfriend Lana. They spend their nights watching the action at cafe flesh wallowing in their own self pity at being sexually incapable....except...! Lana is really positive and hiding the fact to stay with the man she loves. When sleazy club compere Max discovers this, he antagonises Nick and entices Lana until she eventually is brought out of the audience and onto the stage by desire and sexual need. The final shot of Nick, crouched down and distraught while the club laughs at his inadequacies, his girlfriend being screwed on stage willingly, and with Max revelling in Nicks failure as a man, gives an emotional kick of considerable force you wont forget quickly.

Review by leeandfong from the Internet Movie Database.