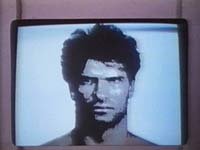 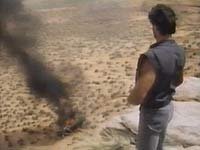 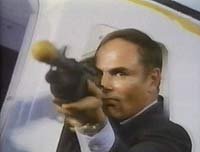 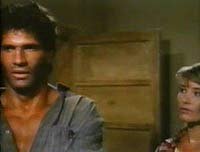 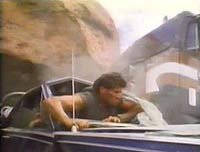 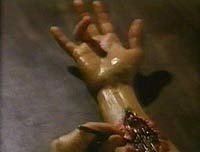 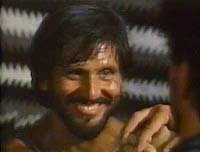 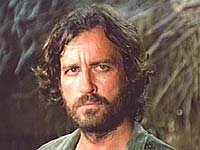 ATOMIC CYBORG aka FISTS OF STEEL aka VENDETTA DAL FUTURO aka AND GOD KNOWS WHAT ELSE THIS MOVIE IS CALLED. When you pop in a movie of which, during the opening credits, the original blue-glowing title of it is blocked by a cheap black strip containing white letters showing us an alternative, even more idiotic title... then you usually have a pretty good idea of what you're in for. And what we have here, is the kind of movie that can be liked by only two groups of people: Very dumb macho-males and... people who can occasionally enjoy a good bad movie. And VENDETTA DAL FUTURO is macho cyborg action cheese in its purest form. And above all... it's of the Italian kind AND... it even manages to rip-off both THE TERMINATOR and BLADE RUNNER at the same time. VENDETTA DAL FUTURO contains that one scene from THE TERMINATOR where Arnold Schwarzenegger opens up his lower arm, revealing metal and hydraulics. Just replace Arnie with Daniel Greene, and voilà, one of the highlights in the rich history of Italian Rip-Off Scenes. Another big scene contains a female cyborg that fights like Pris (Daryl Hannah) and dresses like Zhora (Joanna Cassidy) in BLADE RUNNER. Enough said, I believe.

Directed by Sergio Martino, he once again tries his very best to earn that precious title 'King of Italian Rip-Offs'. Besides that, the film is just stuffed with hilarious aspects and scenes that will have you shake your head and sigh (or grin, depending on the mood you're in). A few random things, perhaps. The plot: A cyborg develops a conscience and gets chased by the company that created him, the FBI and a bunch of low-life macho-truckers. His creators are bad guys in suits with guns, helmed by a villainous John Saxon (always nice to see the man earn a pay-check even though he clearly, once again, doesn't seem to have a clue what he's doing in this film). The FBI apparently consists out of only one detective duo (a black guy and a white woman) which spends most of their time sitting in their office, trying to figure out who or what it is they're after. The macho-truckers are arm-wrestling morons, spear-headed by the inimitable George"The Ruler Of The Wastelands"Eastman. This man (as an actor) simply looks like a loose cannon in every single movie I've seen him in. For this one, they even dubbed his voice by giving him a ludicrous Latino accent. And he sure was pulling some uncontrollable evil faces during those arm-wrestling scenes.

During all this hilarious, mayhemic, predictable nonsense, Cyborg Man even manages to fall in love (!) with good girl Janet Agren. And the feelings were even mutual (ooh, my poor toes curled up so bad that I'm still having cramps). Also, keep an eye out for those numerous ridiculous gadgets in this movie: The Electronic Weapon Identifier of the FBI, which looks more out-dated than a Commodore 64 computer and doesn't come up with answers but lets YOU guess what the murder weapon could be. The Point-And-Locate device of the bad guys, which through ultra-sensitive infra-red technology will display state-of-the-art graphics of the detected body-heat of people inside a building. And I don't know what was funnier: That cheesy and plastic-looking mega-laser-blaster-gun at the end or the silly faces that John Saxon was pulling while trying to handle it.

Anyway, every self-respecting low-budget action movie from the 80's must have a chase-scene with a helicopter and a car and lots of shooting, right? So does VENDETTA DAL FUTURO, of course. Only, instead of carefully planning that sequence to make it look good and suspenseful, Sergio Martino just points his camera at the vehicles and let them drive and fly. Insert a few close-ups of the actors shooting out their windows, and hoop-la-la, we have a chase scene. What else can we do after that helicopter-chase? Well, let's bring in a big truck, have it crash the hero's car and then bring in another truck and blow that one up. Only, don't show it getting blown up. Too expensive. Just insert some shots of an explosion and a one-second-shot of something that looks like a burning driver's boot of a truck, and viewers won't notice the difference.

VENDETTA DAL FUTURO doesn't really have an ending, but the way it ends is also grin-inducing: The last shot freezes on Daniel Greene's face, displaying an intense and extremely intelligent look in his eyes, and then the following profound text appears "IT WAS A DAY IN OUR NEAR FUTURE THE ERA OF THE CYBORG HAD BEGUN". Very nice.

I almost forgot to mention Claudio Simonetti's rather embarrassing musical score. For once, the man really failed to deliver. His score was very Paul Hardcastle, Jan Hammer and Sandra (anyone remember "Maria Magdalena"? Hèhèhè...) and all, but also very third-rate, unimaginative and uninspired. Oh well, every master is granted a few misfires I guess.