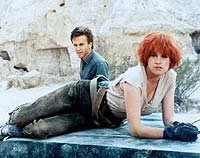 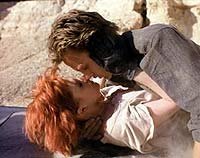 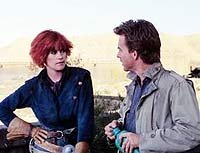 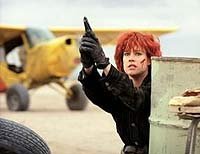 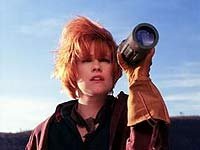 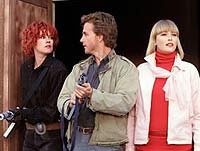 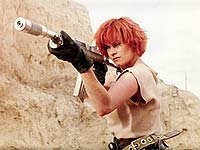 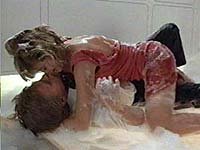 "Cherry 2000" is a sort of post-apocalyptic science fiction Western, a cross between "Mad Max" and "The Stepford Wives". The year is 2017, thirty years in the future when the film was made in 1987. Following some unspecified apocalypse America is divided into at least two parts. In the big cities civilisation goes on much as before. The deserts of the American West, however, have become a lawless wilderness, dominated by violent gangs, similar to those in the "Mad Max" films, who roam the desert in cars or on motorbikes.

The film does not dwell much on futuristic technology, with one exception. The central premise of the film is that, before the apocalypse, science managed to perfect humanoid robots. The main character is a young man named Sam Treadwell who owns a "Stepford Wives" type female robot who acts as his housekeeper and sexual partner. As these robots are programmed to have warm and affectionate personalities and never have a headache at bedtime Sam is very happy with this arrangement, until his beloved short circuits during a love-making session on his kitchen floor. This presents Sam with a problem. His lady-friend was an obsolete model, the "Cherry 2000", no longer being manufactured, but he knows he will not be happy with a more modern replacement. (If the number 2000 was supposed to indicate the year in which Cherry was first manufactured, this is yet another in the long list of sci-fi predictions which have proved sadly premature- human colonies on Mars by 1987, and all that sort of thing).

Sam discovers that there is a supply of Cherry 2000s in an abandoned warehouse, and decides to recover one and install the previous model's memory chip. There is, however, one further problem to be overcome. The warehouse is situated in the now lawless desert, beyond the pale of civilisation. He therefore enlists the help if Edith "E" Johnson, a "tracker" who makes a living through guiding people through the wasteland, but in order to reach the warehouse they have to avoid the attentions of Lester, the leaders of the gangsters who now control the desert. Sam also runs into his former girlfriend Elaine, now Lester's mistress, and the sort of neurotic, foul-tempered woman who could drive any man into the arms of a robotic substitute.

The film is intended to be an action-adventure story, but it suffers from one fatal weakness; it stars Melanie Griffith. By playing a tough, sassy character Melanie was obviously hoping to get away from her bimbo image, but the inconvenient truth is that most of her best performances have come in films where she either plays a straightforward bimbo (as in "The Bonfire of the Vanities") or a bimbo with hidden depths (as in "Working Girl" or "Born Yesterday"). Here as Edith she seems hopelessly miscast. Her normal blonde locks are hidden beneath a lurid red wig, making her look like the second cousin to a Belisha beacon, but she makes no attempt to disguise her high pitched, breathy, little-girl voice, hilariously inappropriate on the lips of a tough action heroine. She would probably have been better playing the robot Cherry, the girl with the artificial, carefully manufactured bimbo personality.

There is occasionally some sharp dialogue; I liked, for example, the exchange when Elaine, told by Sam that her new boyfriend Lester is a psychopathic killer, snaps back "Don't impose your values on me, Sam". (This does not, however, imply that Elaine is deeply in love with Lester; her only reaction to his death is "Well, no sandwiches for him"). The action sequences are not badly done, but as I pointed out when reviewing the original "Mad Max" there should be more to a film than the quality of its car crashes. None of the actors make much impression, other than Griffith who makes an impression for all the wrong reasons. Overall, "Cherry 2000" is a rather dull bit of eighties sci-fi marred by miscasting. It is sometimes described as a "cult film", but cults, whether cinematic or religious, are often mystifying to those who are not already True Believers.