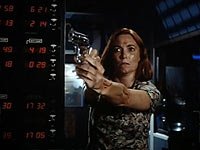 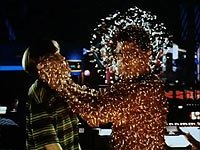 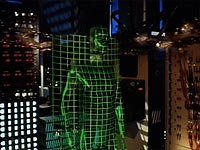 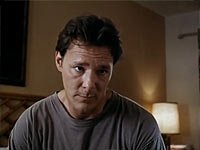 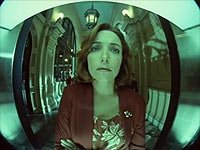 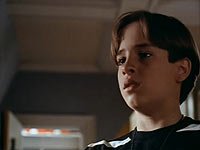 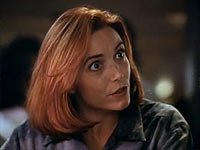 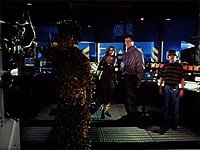 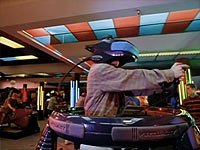 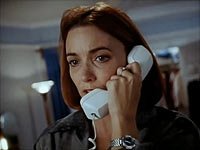 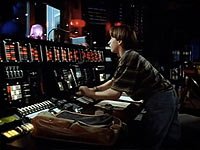 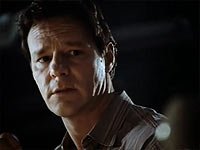 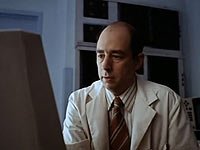 This one flies like an airplane that is suddenly without a pilot; soaring at first, then, gradually, spinning out of control, and plummeting to its own doom. I was in the video store, looking for some mindless entertainment, and came across this one. I vaguely remember this one being out in theaters (I think I was 13 at the time), and since I couldn't remember if it was well received or not, I coughed up the 99 cents and brought it home anyway. What I got was only slightly better than average entertainment.

The beginning is actually really good, believe it or not. I don't know if anyone else thought this, but I thought the guy playing the serial killer did a very convincing and rather frightening job. He really had me convinced that this was another one of those people in the news that could do such horrible things, and act like the quiet guy next door. I thought one of the opening scenes where you see the back side of a couch with a whole family watching tv, and then it pans around and you see them horribly mutilated was rather shocking, and in a weird type of sense, well done. The movie really had my attention at that point, especially when the mom (Karen Allen) and her son go into a computer store, and boom, there's the killer right there. I thought the whole idea about an address book killer was really good and original...I'll say again, this one had my interest peaked, only until I realized that I made the fatal mistake of reading the back cover of the box...at that point, I was simply dreading the part when the killer gets zapped into the electrical wires...boy are my instincts ever right.

Before I start bashing this one, I have to say it may not have been a fairly original concept, but the writers sure dish out very creative ways to execute (no pun intended) some of the scenes in this one. This was made during the early days of windows, and even the internet (around 1993), or at least, when it was becoming popular in homes. Man, talk about deja vu all over again. Anyway, I did think it was cool how the killer got into this huge mainframe, obviously connected to some Central Office or some point of presence somewhere, and could get into people's houses when they simply dialed into the mainframe. He follows people everywhere, and begins to methodically kill everyone on the address book that Karen Allen leaves in the store.

POSSIBLE, BUT UNLIKELY SPOILERS AHEAD

The killings are way drawn out, not suspenseful, and will sometimes make you laugh at how ridiculous they are and how they are trying so hard to scare you. The part where the dog is watching the doggie show on tv and then the vhs tape spits out at him was classic...I almost choked on my beer with that one. But, you have to give the filmmakers credit, they tried really hard to make you scared, and at times, with little scenes here and there (a bowl of grapes deflating due to a bezerk microwave, the killer's garbled voice on the phone line, the body flying out of the oven while being cremated and of course, my favorite, the washing machine that displays sadistic wash cycles such as 'explode' and 'die'. Quite creepy, I must say when you see the scene.) their efforts shine. However, the deaths are pretty stupid and pretty pointless, except to continue where the address book killer left off by killing all of Karen Allen's friends. And then there are some really bad inconsistencies...the WORST being when the son finally discovers that the recent murders are all happening in the order that they appear in Karen Allen's missing address book. Well, our three heroes not only DON'T bother to look to see who is next on the list to be slaughtered, but guess where the mother hides the son in the next scene? You guessed it, with THE SAME person who is next on the list, as we find out 5 minutes later. I was screaming, YOU STUPID IDIOT!! All you had to do was look on the stupid list and avoid that person like the plague! By the way, the scene with the trigger happy police sure would spell L-A-W-S-U-I-T.

The acting is not bad, especially the guy who played the computer hacker extraordinare, Chris Mulkey I think is his name, anyways, he's in a few B-Movies and his acting is surprisingly good. And I have to admit, the kid is actually a competent, believable and effective child actor for this movie, and that is saying a lot since most child actors overact or can't act at all. Karen Allen, what happened to you? You were the hottie with an attitude in Raiders of the Lost Ark, and Boone's girlfriend who slept with the english teacher in Animal House. Her acting is pretty bad, and apparently, age did not favor her too well. She just doesn't show any emotion or shock when people or pets in her life suddenly start dropping like flies. And as I said earlier, the guy who plays the serial killer, for the 15 minutes that he is actually on screen in the beginning, he is really chilling to watch. I was wishing throughout the whole movie that they would have just made this movie into a film about the address book killer, in the flesh, without the 'techno thrillerkiller comes back from the dead' aspect. Like I said, the opening scene with the dead family is disturbingly creepy, as well as when you see the killer in the store, licking his fingers which are caked with what appears to be dried blood.

As for the special effects, aside from the quite well-done scenes of the killer traveling through the wires and going through people's systems, the effects are horribly bad in most areas, especially the end. The end is the worst part of this film. No entertainment value at all. The special effects are just gruesome looking at the end...enough said.

All in all, not a bad movie. If you end up watching this, you will probably be like me in saying that it starts off great, but then gradually begins to suck. This movie, though, as you can tell, was really on the money with the technology at the time, which, in some small ways (and I mean in very basic ways) is up to date. Being an Information Systems major, it was amusing to see how far we've come in ten years and then some. I liked the technical aspect, but as for the horror aspect, the movie falls flat on its face 20 minutes into the film. Basically, once the killer goes into 'the machine', the movie dilapidates into eventually, a sorry excuse for an ending I've seen in a long time. But still, not a bad time waster overall. I'd love to give this one 7 stars for being a slightly better than average movie, but I just can't, it wouldn't seem right to the other 7's I've given over the years, LOL. Because it has very few redeeming qualities, or scares for that matter, despite an interesting premise, occasional moments of great (though, few and far between) filmmaking and a great beginning, this one gets 610 stars.

Review by boondocksaint20 from the Internet Movie Database.