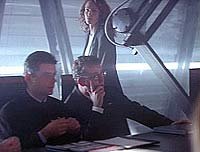 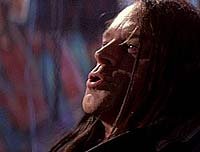 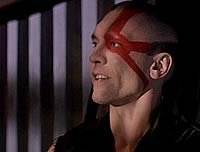 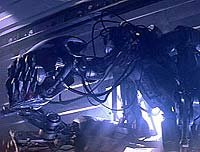 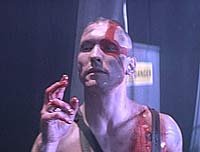 To be able to get oneself on the map towards discovery can take a long time. Getting acknowledgement by age 30 though seems pretty impressive. Especially for Stephen Norrington, who would be best known for directing Marvel's first successful theatrical film, Blade (1998). Prior to this though, his first directorial debut came in the form of a different actionhorror film, which was this one. In some ways, viewers will understand the tone of this film, as it was more his project entirely as opposed to the ones he would direct later. This film has Norrington's style written all over it. And for what it's worth, for his first venture it's done okay for the most part. Viewers just need to be aware of couple things.

Written and directed Norrington, the story takes place in the near future where an armament corporation named CHAANK is looking to perfect its latest weapon, which the public has not approved. The developer behind the project is Jack Dante (Brad Dourif), a psychotic and deranged employee of the company. Meanwhile Hayden Cale (Ely Pouget) is the new CEO of the company hoping to turn the company around. At the same time, a group of rebels infiltrates the building to get back at CHAANK's unapproved behavior. However, after Cale goes after Dante for his termination, Dante unleashes his robot called the Warbeast to wreak havoc. Thus the film's title, everyone is up against the "Death Machine".

While the script isn't very deep, there are some aspects that make it memorable in its own way. For one, the characters are unique; maybe not the most memorable, but they are fun to watch. Joining Pouget and Dourif are William Hootkins and Richard Brake as other corporate executives. Making up the trio of rebels infiltrating the corporate building are Andreas Wisniewski, John Sharian and Martin McDougall. More surprising is that Hootkins also played in Hardware (1990), which had a similar premise. Brake would go onto play the Night King in HBO's Game of Thrones. Sharian would go on to play a role in The Machinist (2004) and Wisniewski was in Die Hard (1988) before this film. The script also has the characters throw out a bunch of pop culture references, which is fun.

Unfortunately, there are parts to the story that don't work. One being the plot in general. The idea of an evil corporation developing weapons that nobody wants has been done several times before. The idea of having a rampaging robot killer on the loose is very similar to that of Hardware (1990) and there's even elements of Roland Emmerich's Universal Soldier (1992). That and the getup Brad Dourif wears looks pretty ridiculous, almost like pre-Tommy Wiseau, bad wig an all. But this doesn't take away the spectacle of the film. The action in this film is very energetic and the special effects are decent for the budget this film had, headed by Peter Hutchinson. Even the gore is up there. Some of the deaths are pretty gruesome.

For overall visuals though, that was disappointing. While cinematographer John de Borman was competent in the way the camera was handled, the coloring to the picture is very drab. There's too much dark colors like gray and black making the look of the overall production uninspired. It's just not as interesting as it could be. The same could be said for the musical score composed by Crispin Merrell. While the score isn't hard on the ears, it's not the most dynamic in its presentation. The sound relies more on atmosphere than it does actual theme based tunes. While occasionally there are hints of synths, pipe organ and percussion that sounds like Brad Fiedel was involved, it doesn't get more complex than that.

It is certainly not an average film, because it shows significant effort went into it. But what doesn't work is its dull plot, music and camerawork. Thankfully, the action, gore and characters help make the film marginal fluff entertainment.