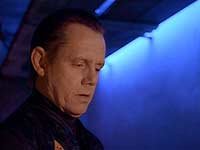 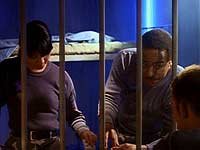 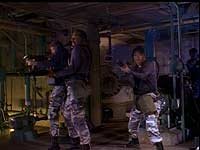 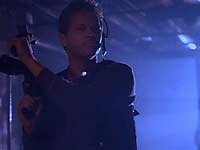 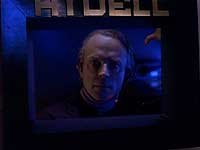 Troy Cook, a relatively obscure director, has brought to screen an exercise in discrepancies between plot time. It is a roller-coaster ride - if afterwards you throw up due to how nauseating it is. It is also a movie that is so mishmash into an oblivion, stitched together with not even a modicum of delicate care and characters rather odious and inasmuch as you can handle them it's the only thing that is focused and transfixed on. I swear I had a paucity of care through the first 45mins of running time that was consumed with such things as Brad Dourif's hamfisted acting, terrible one-liners, and talk of something between the organic and artificial side of the brain; all (cause and effect) mustered through a shoot out of people locating mine fields...

The movie is so unpleasant and noxious. It stars Billy Drago as Kilgore, Reiger played by Dourif, and another bunch of people trying to outweigh a lot of the story by trying to "track down" forensically to find out how these killers got into the 'Titus 4', but also why they didn't use it to great avail.

The plot centers on these people who infiltrated a base killing people at a monitor, and then becoming android leaders. Meanwhile, spectators try to analyze the problem, and then some troops are deployed under the authority of Reiger to try and rescind the peace and take over the "evil head of the corporation" for their useless and badly prompted attempt at taking over the galaxy!! And I'm not sure about the rest because I found the movie rather hard to watch... My cut off point was an hour in. However, I'm sure all it consisted of was jumbled up fighting scenes involving characters such as Kilgore getting unintentionally shot and then we have to be inspired to care through nothing, but screen time forcing us to watch it. Naturally I fell out of place, and switched it off.

The framing is akin to "The Langoliers" in it that space looks like a hub for everybody to get jacked up to an LSD drug and take hits from; it's not like Space at all; it's more like a subconscious version of Space that you might dream up when you're somnolent.

It is a bunch of exposition and orders barked out by the lamest guy on earth, hamming it up and arbitrarily hating one of his comrades as a form of superiority. It is like a little kid fighting, and it's not even given clear cut depth. And yet Brad Dourif is such a revered actor, and has put himself into a movie that he has fortunately not been slandered from because no human being on earth has practically watched it.

The dialogue is tenuous as expected; like Butch not being much of a man and then getting his head plonked right off a bar in prison. And the reason they're in prison is because... they were bad? You know, the cryptic nature of the film mixed with the almost bogus scope and unbearably cheap production values, are only the effortless attempt to make this movie a rip off of such things like "Battle Galantica", "Star Trek" and even "2001: A Space Odyssey" with the way they focus on mini extraterrestrial entities (Space Odyssey is one of my favorite movies by who I consider to be one of the greatest directors; the other two I'm not a fan of, but it proves how terrible an experiment this movie was).

If you're expecting some of the vibes to reflect on the 90's, don't buy this. If you're an eager Sci-Fi collector then you might like this - but I also like Sci-Fi and this is just the nadir of Sci-Fi and narrative, so if you just watch Sci-Fi for the thrill of watching explosions and listen to terrible one-liners (ones that Joss Whedon's "Firefly" a much better programme, would be sickened by) then you will like it. If you enjoy extemporaneous fighting scenes then by all means.

... Sorry. I apologize for tally marking the statistics. I don't think anybody would really like this movie.... ANYBODY. But if you do, it's none of my business.

Review by IMDBcinephile from the Internet Movie Database.