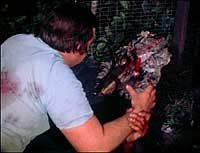 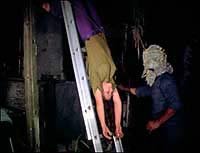 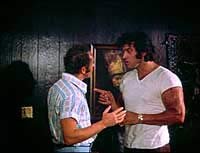 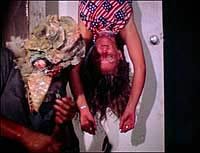 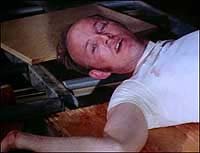 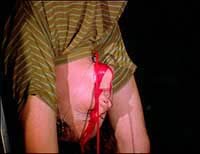 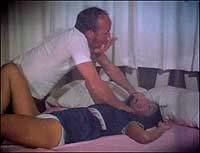 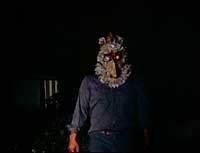 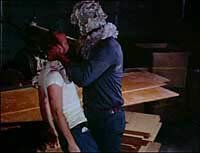 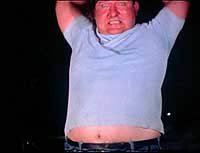 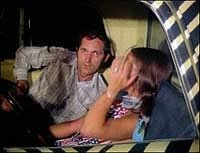 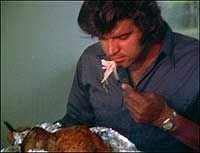 Okay, I have two things to say about BLOOD FREAK. First, about my disappointment with the twist ending. And second, a warning to those who don't like real on-screen violence inflicted on animals.

Okay, first: I bought the BLOOD FREAK DVD mainly because I love SOMETHING WEIRD DVDs, which are full of extras, and also because I love really bad movies. BLOOD FREAK is woeful. There's no doubt about that. But, and this is only a technicality and I'm not trying to be pedantic here, the story actually makes sense. The thing that everyone has failed to mention is the "twist" ending: that the whole idea of the guy (played by beefy Elvis-look-a-like Steve Hawkes) turning into a monster with a head of a turkey and feeding on addicts' blood is nothing but a DREAM or a HALLUCINATION. The character never really turns into a monster. After the guy takes the drug from the turkey farm, the man has this really bad trip and dreams he's turned into the turkey monster. At the end, he wakes up and realizes that everything was only a nightmare. I was sorta disappointed by this twist ending. BLOOD FREAK is still bad but it's not as bad as if the character had actually changed into that turkey monster. The hallucination twist is a cop-out of sorts, which robs the movie from being the next PLAN 9 FROM OUTER SPACE.

With that off of my chest, BLOOD FREAK is still inept in every respect. The acting, the cinematography, the dialogue. Everything is strictly amateurish. And the chain-smoking narrator, who is often seen coughing, is probably the stupidest and most hilarious thing ever put on screen. I mean, at least Criswell didn't look sick in PLAN 9 FROM OUTER SPACE. Some moments are truly weird, like when Steve Hawkes's girlfriend sees him for the first time as the turkey monster and starts talking about how the people will perceive them as a couple or how their children will turn out is, for a split second, unbelievably brilliant in its total ineptitude. There's a fair amount of violence in BF, including a scene where a man gets one of his legs chopped off. It's obvious the actor has an amputated leg in reality and they simply hired him just so the scene when the turkey monster cuts off his foot looks very convincing.

And speaking of violence, here's my second point: I also have to warn people who don't like to see animals killed on screen. At the very end of the dream, a real turkey is killed senselessly. Personally, I would have easily avoided this scene if I had known about it in advance. It's totally gratuitous and tasteless, but then this is to be expected in low budget exploitation films, even Christian exploitation films. LOL!

In the end, BLOOD FREAK is a must see for all aficionados of bad films. But I have to admit that I was disappointed by the two aspects that I mentioned above.

Review by Maciste_Brother from the Internet Movie Database.