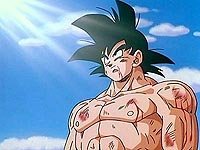 Where the first three DBZ movies gave fans a lot of what they wanted (including the mind-blowing action sequences that were used in the opening credits for the show, "Rock the Dragon!"), the fourth movie, "Lord Slug," is a major step down, especially considering that they should be a lot more powerful by now.

The plot is as follows: A killer comet or some such space rock is headed for Earth, somehow causing a bunch of natural disasters in the process. Just when it seems that all hope is lost, though, the meteor is diverted...only for a new threat to descend on Earth from the asteroid.

Enter Lord Slug, the enigmatic tyrant from beyond the stars who has come to claim the Dragon Balls and turn Earth into his new frozen, barren homeworld. It's up to Goku and co. to stop him!

I remember getting this on VHS when Mom and I were at Target (I don't remember which one of us actually paid for it though lol). It was this one and "Big Daddy," and unfortunately the tape has since been eaten by my cheap VCR so I can no longer watch it. It's decent for an action film (though nowhere near the first 3 movies), and the fight sequences, while lacking the intensity of its predecessors, are at least memorable. This so-so direct-to-video movie is somewhat redeemed by a heavy metal-type soundtrack including Disturbed and what's-their-faces. (Of course, the version which aired on Toonami had a different soundtrack, which made it feel kinda like a let-down.)

This movie tends to suffer from what I call "GT Syndrome." The fights are okay, but the animation and frankly the movie as a whole is bland and kind of rushed, even compared to other movies in the series. Its place in the main timeline is also a question for the fans, although there is the possibility that it takes place after Goku arrives back from space and he simply hasn't learned to control his SS powers yet. The overall plot is okay and even the threat to the planet seems halfway plausible (the aliens in space-suits, their takeover of the planet), but the end seems kind of tacky (think "Tree of Might," only instead the tree is a mass of clouds). Even the main villain isn't that original...

Final ruling: Basically sets the bar even lower for DBZ movies. It doesn't fit in the timeline, the animation is so-so, and it's not even as fun to watch as most of the other movies. Basically, only for those who have the money to waste andor are hardcore fans. (Why release 2 movies a year if this is the end result?).

Review by jasonmadrid from the Internet Movie Database.