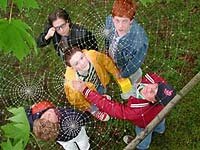 If movies have taught me one thing it's that aliens are obsessed with the human anus. They cross galaxies to probe and explore it. What mysteries lie up there? But Dreamcatcher goes one step further. These aliens aren't merely obsessed with exploring the rectum; they hide up it. It should be a shock, but aliens have been crawling out of my colon for years

Dreamcatcher gets off to a reasonable enough start. We get a nice little sequence where we're introduced to the four main characters and their respective powers  they're telepathic. Then we get a bit of King-style strangeness when one of the characters gets run over. So far so good. The man survives and then we get a pleasant sequence in a log cabin where the friends talk, joke and give thanks to the kid that gave them their strange gifts. It's here that the film begins to go downhill. We get a Stand by Me-style flashback to their childhood where the four friends save a half-wit from a couple of bullies who want to make him eat faeces. It's not a terrible scene, but the kids come over as insufferable do-gooders. The fact that they're fans of Scooby-Doo speaks volumes. But they save the half-wit, a kid called Duddits (is it law that movie half-wits have to be infuriatingly lovable?) and he gives them all sorts of gnarly powers. It's not a great sequence, but the film is still chugging along.

The film derails, though, when we go back to the log cabin and the adult characters. Jonesy (Damien Lewis) stumbles upon a man lost in the snow. The stranger's not feeling too well and he's got a strange red mark on his face, so Jonesy gives him shelter. The man is grateful but he keeps on farting. Then Beaver, played by Jason Lee, stumbles into the cabin and the two friends have to put up with the noxious fumes. To cut a long story short the two friends then give the bloke a place to sleep but he ends up dying on the toilet. You see, this is what happens when aliens invade. They find a nice warm place in your colon and then you die on the bog when they want some fresh air.

The scene that follows is laughable. The two friends have the alien trapped in the toilet (it can't get out while the fat bloke is sitting on the khazi) but somehow Beaver ends up sitting on the closed toilet lid instead. Jonesy then decides that it's a good idea to get some tape from the shed to keep the lid shut, so he leaves Beaver alone on the lav. It's kind of like Lethal Weapon 2, only with an alien instead of a bomb. But to show how stupid the film is, Beaver is wrested from his safe position because for some reason he wants a toothpick to keep him calm (is he Razor Ramon?). Personally I'd be more worried about my bum. But the alien gets loose and kills poor Beaver right before Jonesy's eyes (Jonesy takes an age to find the tape).

But what of the alien? What does it look like? Well, it's worm in shape but it has a mouth like a tooth-filled vagina. I'll get onto my interpretation of this in a moment

But the worm isn't the real alien. The real alien confronts Jonsey a few moments later. It's a CGI monstrosity and is kind of a human-shaped blob. But then after it stares at Jonesy it seems to explode in front of his face. I was puzzled for a moment or two but then it's revealed that the alien has possessed him. And how does the alien speak? Why, it speaks in an English accent, of course! Pip-pip, old chap! But the Gollum-like scenes where the real Jonesy and the camp English alien Jonesy talk to one another are hilarious. I kept wondering whether it was a joke. Surely such assured filmmakers couldn't make such a grave miscalculation. But apparently they could, because the film only gets increasingly stupid.

Another brilliantly dumb scene is when another one of the friends is stuck in the snow with some beer. He gets a little bit drunk and needs to urinate. So he's relieving himself, and writing a boy's name into the snow ('Duddits'), when one of the alien worms leaps out and bites his penis off. And this brings me onto my interpretation of the alien invasion (as its never explained). My theory is that a race of self-hating, gay, English aliens (there's no way alien Jonesy can be straight) are trying to kill Earth's homosexual population  none of the friends are married and one is rather fond of talking about his privates. And to do their bidding they have teeth-filled vagina worms to bite off the genitalia of any man who isn't 100% straight. Hey, it makes as much sense as the rest of the movie!

Adding credence to this far-fetched theory is Morgan Freeman's character. He and his second-in-command, Tom Sizemore (who are the gay military men trying to stop the gay alien invasion), spend a lot of time giving one another flirty glances. And Freeman's character has a John Wayne pistol, Dennis Healy eyebrows and talks of crap weasels. And the two men also end up killing one another. This scene is certainly one of the funniest. It's Tom Sizemore versus Morgan Freeman, only Freeman has a helicopter (with the most phallic mini-gun known to man attached to the nose) and Sizemore has a pistol. Who do you reckon wins? Man in helicopter? Or man on foot with a pistol? Why, the man on foot wins! It doesn't make any sense. But then again none of the film does. It's a Byzantine puzzle that begins with bums and ends with dumbness.

Review by Ricky_Roma__ from the Internet Movie Database.