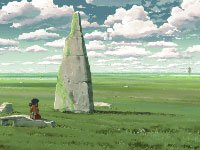 This is a hugely ambitious piece of work. It scores highly on design, and the attempts at creating a fleshed out setting are clear, but numerous unexplained plot conveniences, an overly long run time, and the constant sense that you've seen this done better, ultimately prevent this from standing out from the crowd.

The Ghibli parallels are striking. The design of the lead characters (cute, furry sidekick included), the musical cues, and the lush green landscapes. Even more so is the look, feel, even movement, of the numerous supernatural beings. Labelling them Ghibli off casts would be too harsh, but to call them anything other than "heavily inspired by" would be ignoring a patent truth.

That's not to say the influences are a problem. For the most part the film looks gorgeous. What held it back mostly was the lack of satisfying development of the Underworld's back story. There was no shortage of explanations, but it was exposition heavy and generally raised more questions. Why did the surface kings and emperor's need to use the Underworld's knowledge and treasure to rule? How did they do so? If their pillaging went on for hundreds of years, why did it take the Underworld so long to decide, at the drop of a hat, to keep them out? And where did those crystals come from suddenly? Asuka's nonsensical behaviour, like chilling on her backside until the sun went down, despite having to get somewhere before the night demons came out, was really jarring. It was impossible to relate to her need to sit and ponder her plight (or perhaps she was just tired) when there was deadly danger she was fully aware of, had just been reminded to avoid. The drying up of a river when it provided the only form of defence was obviously for dramatic effect, but running further and further into increasingly thinning water, when it was the only form of protection, is not something any sane human being would do.

These were not the only plot holes, and unfortunately there were enough to take me out of the film and have me making a mental note to rewatch some Ghibli. The overriding message of coping with loss was not a bad one, but the overall narrative was clunky and not emotionally engaging. I doubt I'll recall much of this film two or three weeks down the line, and will unlikely ever rewatch it.

Review by barryvalder from the Internet Movie Database.