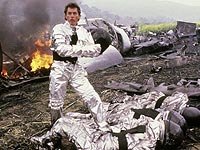 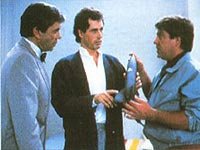 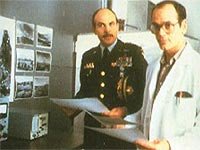 There were some distinct changes from the novel. The company the protagonist creates is still World Enterprises but Thomas Jerome Newton's name has been changed to John Dory, Oliver Farnsworth's name is Felix Hawthorne, and Nathan Bryce's name has been changed to Vernon Gage. But in spite of these changes quite a lot of it is surprisingly faithful to the book. When John Dory meets Hawthorne the dialogue is almost identical to the original dialogue between Newton and Farnsworth. When John Dory takes off his human disguise he looks identical to David Bowie's Anthean form in The man who fell to Earth movie. However, I have to say the 1987 effects for this were better than what was in the original film. In this pilot you can see him remove the human contact lenses, the earlobes, etc... I also found myself gasping when I heard the word Anthea actually said. It was the first time I had heard it spoken in an adaptation of The Man who fell to Earth outside of the actual novel.

There are some big differences from the novel as well The alien protagonist carries with him a pouch of diamonds that he claims are from a ring. Yet again he claims his car broke down but there's an extended scene of him meeting a truck driver and then a waitress. He has a fondness for oatmeal (like in the novel) but alcohol has no effect on him. Instead he gets drunk on tomato juice which I found incredibly funny because I happen to like tomato juice. He talks about Anthea on the brink of destruction because of meteor showers that have already destroyed a lot of their world. This disappointed me because it causes the story to lose some purpose.

The Betty Jo Mary Lou character has a new name. It's Eva Milton and she has a kleptomaniac son named Billy (played by Star Trek: Next generation's Wil Wheaton). Unfortunately since this pilot was made in 1987 A few of the costumes are very dated. At one point John Dory is dressed in a long black shirt over a striped shirt, the sleeves folded to his elbows while wearing white jeans while Eva, at one point, resembled a thirty something year old trying to pass for Madonna's Like a Virgin phase. I'm all for eccentric fashion but this definitely dated the adaptation quite a bit. The Man who fell to Earth should remain timeless.

Just like in the film starring David Bowie, the alien hero has a wall of many television sets. He gets dizzy and yes, he met Eva the same way he met Betty Jo. However he has a few powers that our beloved, frail, Thomas Jerome Newton does not have. With a small crystal he carries with him he can cure his own nausea and also, with a touch of his hand (that would glow) he can heal the wounded in a very obvious "borrowing" from ET and Starman. With the use of his crystal he also has some very limited telekinetic abilities.

Though he has his naive moments he's not quite as naive as the original Newton. This Anthean is a bit more clever and observant. He knew when a camera was hidden in his home and had it destroyed. He could tell when his phone was tapped. And when he got a paper cut and his secretary tried to walk off with his handkerchief, stained with a sample of his blood, he stopped her. I actually kind of liked this change. Morse is played by Robert Picardo from Star Trek Voyager. Now I'm more of a Whovian (Doctor Who fan) than a Trekkie but I'm still a nerd at heart.

He's actually a little sweeter than the version of Newton we're used to. The World Enterprises base in New Mexico is identical to the original film. He meets the Betty Jo equivalent (Eva) in New York City instead of Kentucky. There are more scenes of New York in this version. And when he crash landed there had actually been four Antheans on board but he was the only survivor. The military, of course, found the crash site and took the bodies but they turned to carbon before they reached Morse's lab. Morse comes off as an all purpose alternative for Dr. Martinez.

Billy, the Betty Jo-like character's son, gets jealous when Dory mentions his own son and Billy decided to get even by telling Gage (The Bryce-like character) all he knew about Dory

Much like with what is being planned for The man who fell to Earth musical the Bryce based character betrays Dory but in this version he deliberately causes him to faint and then steals the alien crystals he carries around with him in a little leather pouch.

When Dory regains consciousness he's strapped down by Gage in a lab and interrogated. Like in the novel during the more friendly conversation with Bryce, Dory refers to his ship he is having built as a ferry boat and talks about how there's less than three hundred of Antheans left. Though in this version of the scene the Anthean is a captive of the Bryce-like character the conversation dialogue is nearly identical to the novel. Then it strays again when Gage tortures Dory. Gage accidentally blows up his own lab and dies in the process. No one seems at all upset at Billy for betraying Dory. Dory eventually leaves Eva and Billy and gives this soliloquy type of monologue addressed to his son on Anthea, that he will see him again, it will just take a little longer than he thought.

In spite of the parts I liked I can see why the attempted television series did not work.

Review by CountVladDracula from the Internet Movie Database.