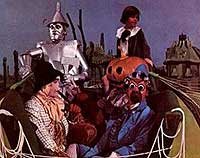 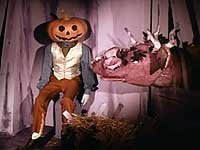 Yep, this is about as bad as it gets..... let me state right from the start that there is absolutely NOTHING remotely wonderful about "The Wonderful Land of Oz", except for when it's over.

As you've undoubtedly already guessed this dismal, low-budget, amateur production is based upon the universally popular literary creations of author L. Frank Baum and at the same time The Wonderful Land of Oz is also one of the worst movies ever made, as it possesses absolutely none of the legendary charm or appeal that the Wizard of Oz brought to the screen 30 years earlier. But why is that? Well having seen it only once (once was more then enough!) I can sight several reasons, such as...

The star of the film is Channy Mahon, the director's 11 year-old son (nepotism?), in his one and only acting role, who obviously had no talent for acting and he looks and sounds completely disinterested throughout the movie and every single one of his lines sounds flat and completely lifeless - his character is a total bore. Next up and perhaps even more atrocious is the film's dismal sense of art direction and ultra low-budget production values, which is undoubtedly best exemplified by the films terrible looking sets and that is where the film scores most dismally - it's woeful set designs. To be blunt about it - some high school plays have probably had better looking sets then what's seen here, as every single set that's featured in The Wonderful Land of Oz is a cringe-worthy eye-sore; all of which are painfully cheap looking, ridiculously small in scale and look as if they were constructed out of paper mache or sagging cardboard. It's a real toss-up as to which is worse: the acting or the set work. But to be fair they did do a bit better of a job in the costume department - with the exception of the Tin Man (cheap thin-gauge steel and a silver leotard). The overall sound of this film (or at least the segments what weren't overdubbed in post-production) tends to sound thin and "barren", as if the soundstage's walls where paper-thin or more likely it can be blamed on inadequacies in the sound department. All this visual and audible splendor is topped off with some music that sounds vaguely Wizard of Oz-ish.

What of it's plot? Well when the actings as terrible (from all involved) as it is in this movie, the plot doesn't really seem to matter too much, but essentially their "following the yellow brick road" (or at least this movies pathetic equivalent of it) they're en route to Emerald City - if that's what you want to call it. Whew! What a LAME set! What I noticed is that because so little happens due to the characters actions (or inaction) in any given scene, that the films characters essentially give in and simply tell you whats going on with endless lines of lame, half-wit dialog, again lifelessly delivered in one tediously pointless scene after another "Glinda The Good" being the worst offender of them all. What's sad is that they actually think they're being funny..... however, if you have more then three brain cells it should register as nothing other then tedious, pointless, sub-amateurish drivel. And if you make it to the end you'll notice that the entire Land of Oz seems to inhabited by no more then 20 to 25 people (yep, this movies a real sparse fantasy) and most of those 20 to 25 people form the ranks of an all-female "army" who appear to be wearing drum majorette costumes. Whose leader they encounter wandering around out in the woods, carrying baskets full of sandwiches and with this encounter yet another terrible song comes to life - and if that doesn't sound lame enough to you relax, because just moments later you'll bare witness to her "arming" her loyal and fearsome fem-army with knitting needles! Seriously.

Like the majority of low-budget films The Wonderful Land of Oz is a short film, clocking in at mere 72 minutes, however, do to it's bad acting, extremely lame plot, awful song sequences, vapid dialog, cringe-worthy visual presence and an overall pointlessly meandering nature it seems much longer then it really is. Here's some trivia for you, Barry Mahon, the director of this wretched little movie (who was mostly known for soft-core smut), also directed "Santa and the Ice Cream Bunny" three years later in 1972, yet evidently he found that film to be too bad even for his standards, because he went under the alias of "R. Winer" for that one. Names aside, all I can say is that, if you've seen both of those incredibly awful movies, I think you'll also agree that they BOTH look and sound as if they were created by the same director - who indeed, was gifted with the same "masterful touch".

Mr. Mahon you are now on my ever-growing list of talent-less and terrible directors.