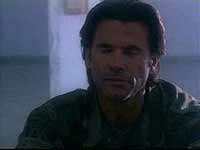 Hours after the detonation of a nuclear bomb, Trainor, (Lorenzo Lamas) and a military team, Maj. Michael Ross, (Adam Harrington) Sgt. Hall, (Will Sanderson) and Capt. O'Brien, (Rachel Hayworth) are sent in with Dr. Cole, (Ona Grauer) and Prof. Peter Langdon, (Jim Thorburn) to a chemicals weapons facility where they both work. Upon entering, they find the entire complex empty and covered in slime, as well as one of their experiments. When they find that the escaped experiment is a cloned alien species designed for the US Army, they race to get out before becoming infected by the creatures.

The Good News: This wasn't all that bad of a creature feature. The opening half hour of the film is pretty creepy. There's a couple of really suspenseful set-ups, all stemming from the fact that it's almost impossible to see what is lurking in the shadows. There's constant hints around that there is something there in the place, but it's not known what. The lighting and damp location there play important parts in that fact. There's some really nice good moments driven from the early suspense scenes. The film really picks up back in the final twenty minutes which is filled with action and lots of excitement to close the film out on a high note. The chase through the missile room is the best part, keeping the gunfire going and the action going along. The creature looks really threatening, a kind of off-shoot of The Gillman, only with some adjustments done near the face to change it slightly. The film does have some rather decent science fiction to explain the proceedings, which can get overly complicated but are still noteworthy without being over-the-top. It's all quite decent.

The Bad News: There's still a couple of things wrong in this one. The first is the pacing, especially in the beginning. Granted, there's some really creepy moments in there, but it's also quite slow, as the majority of the time remaining is devoted to the clichéd dialog choice of having characters constantly repeat that the mission is top-secret and won't reveal what's going on until too late. That not only is a tiresome cliché but really drags out the film when there's a fifth conversation that constantly features the same result with the same dialog. The monster itself is so rarely on-screen that, while it looks easily creepy, there's hardly any scares derived from it. The design is good enough, but it's not seen enough to really get the most out of it. The very low body-count also lowers the gore in here, and while we do get some gory kills, they aren't really on-screen that often. They are for the most part off-screen, with the weakest, non-goriest kill being shown. That is the most aggravating part about it, especially because the other deaths are really gruesome and the weakest one is on-screen. Otherwise, this isn't all that bad.

The Final Verdict: Yes, there are some problems with it, but that isn't enough to really disregard it. It's certainly not one of the better films of this type around, as it's too clichéd to stand out, but it's still worthy of a look for those who are interested in this type of films.