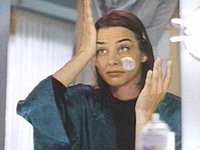 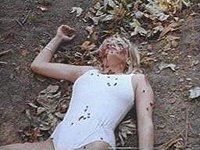 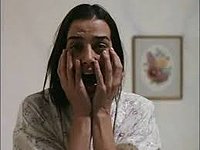 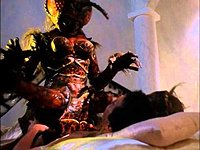 Being a fan of Corman's original creation from 1959 I had a hard time stomaching this remake. Sure the original film has its flaws like most Corman films with its dragged out dialog and quite boring mid-plot but it sure had charm which is something this film lacks. Everything ain't bad though and even if Wynorski fills out the majority of the plot with boring sex scenes there's one thing that this remake does better than the original and that the actual wasp woman. I'm not talking about Jennifer Rubin who just like a wasp couldn't act her way out of a paper bag; I'm talking about the transformed version of her. In the original film it was basically just Susan Cabot running around in a black spandex suit. This time Cormans studio actually put some dollars into creating a monster which is far far from believable but nevertheless quite creepy (almost at least). Sure it's stale and quite weird in some scenes but thinking of the budget and the year it was shot the only alternative would have been CGI-effects and we all know how that went in Dinosaur Island.

The story follows Cormans classic to the book with some exceptions but even so I can't help but asking myself what went wrong along the way. The whole film feels like a dragged out episode from Tales of the crypt. A show that I love but there was a reason why these episodes never went full-length.

Leaving this film behind in my Wynorskivaganza marathon (which never became a marathon because of work and other stuff to do) I am left with an empty feeling since it didn't really deliver where Wynorski often delivers. The sexy parts of the film are far from sexy, it lacks any humor like some of his other work and that creative cord that was still intact in his earlier films is long gone. In many ways it reminded me about his remake of Not of this earth. An movie that somehow survived a complete trashing thanks to its original story, which it copied from a 50's flick.

Review by bernhard_alund from Sweden from the Internet Movie Database.