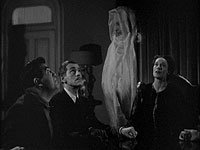 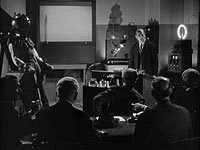 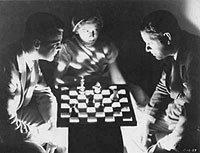 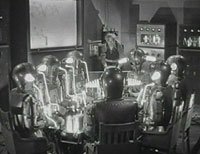 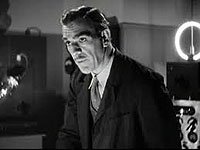 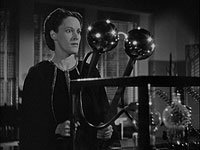 This was a movie that I had never heard of until I was looking through Letterboxd for movies that were horror and released from 1941 for my Odyssey through the Ones. I decided to make this a featured review for this reason as well. Aside from that, I just knew what the title was and this was another movie with Boris Karloff I had never seen as well. The synopsis for this movie is scientist becomes obsessed with the idea of communicating with his dead wife.

We actually start this movie off seeing an old, dark, creepy house while it is storming out. There is voice-over narration from Anne Blair (Amanda Duff). The house is in ruins and we're going back to learn why. Anne's father is Dr. Julian (Karloff). He was a respected scientist that worked at a school, but in the end, he was shunned and feared. It all started on a similar rainy night in the past.

Dr. Blair is conducting an experiment for his colleagues at the school he works at. Helping him is his assistant of Dr. Richard Sayles (Richard Fiske). His experiment is to show that he can record the brainwaves of an individual that is wearing a metal helmet he has created with censors in it. Dr. Blair's end game is uncovering the secrets of the brain as well as read people's thoughts. His colleagues scoff a bit at this, but see there is potential here. At the end of this, Dr. Blair's wife arrives and her name is Helen (Shirley Warde). She is trying to collect her husband so they can pick up their daughter from the train station. Before going, Dr. Blair proves that each reading is like a fingerprint when Helen allows her brain to be recorded for these scientists.

Their night takes a dark turn though. Helen is killed in a car accident. This causes Dr. Blair to descend into depression. Anne and Dr. Sayles cannot get him to come out of it. Another turn happens when Dr. Blair turns on the machine and it records wavelengths similar to his wife's. Karl (Cy Schindell) recommends he go to see a medium that he visits in order to speak with his deceased mother. Dr. Blair agrees to accompany him and meets Mrs. Blanche Walters (Anne Revere). He sees through her gimmick, but realizes there could be some scientific applications to what she is doing. Together they try to realize his experiment, but her motivations are a bit more monetary than Dr. Blair's. This leads them down an even darker path that will change all of their lives forever.

That is where I'm going to leave my recap. As you can probably guess, this is another mad scientist film. The science that they're presenting here is pretty interesting and I wonder how much of it is actually based in reality. I would bet that brainwaves to an extent are different in everyone, but most of the recording materials that we would present it in very similar manner. I can overlook this as I love the grand scheme implications that we get.

These implications are interesting. It is presented to Dr. Blair's colleagues that he could control the world with what he is presenting. He doesn't have these lofty goals. It isn't until his wife passes away that he descends into madness due to grief. This makes him susceptible when he meets Mrs. Walters. She is a con-artist, plain and simple. When she hears what his experiments are and what they could do, she is all in as a way to make money. Dr. Blair doesn't do much to stand up to her, so he is guilty by association. In reality, he really just wants to talk to his wife again.

There is something else that gets introduced in this opening experiment that I wished they did more with. One of the scientists states that you don't know what could be on the other side. This almost gives it a Lovecraftian vibe or something you get with a multi-verse idea. There could be an entity waiting on the other side to come through. This gets explored a bit as we go as well. Dr. Blair isn't completely sure that when he turns on the machine after Helen passes away, that the recording of brainwaves is hers. It looks like it, but what is stopping something else from mimicking it. There is nothing strapped in. Dr. Blair is warned. I don't mean to spoil this, but it is something that is referenced and not realized as well. The movie only runs 65 minutes, so I wish this is something that they explored more. As it stands, this movie does flesh out its story well enough, but there are missed opportunities with things introduced.

Where I want to shift over to next would be the acting. Karloff is good as our mad scientist here. What I like is that he has a good heart. That gets established and it is due to grief that he starts making questionable decisions. I've already stated that in the end, I don't find him to be a villain per say. He is weak and being controlled by Mrs. Walters. I will give credit to Revere for that role. She does it well and I think that commands the screen, even when she is acting opposite a legend like Karloff. Fiske is fine, but he disappears for a long stretch of the movie. The same can be said for Duff. What is a shame for her is she really doesn't have much a character aside from being a daughter and it appears to be Dr. Sayles love interest. She is supposed to be important in the end, but it doesn't seem she was given enough attention. Aside from that I'd say that Schindell, Adams, Kenneth MacDonald and the rest of the cast rounded this out for what was needed.

Then really the last things to reference would be the effects, cinematography and the soundtrack. We don't get a lot for the former, but I do like the contraption used for the experiments. It gets expanded for the movie in the end and gets quite morbid to be honest. They do use a ghostly effect as well as showing this vortex during a later experiment as well. It is early cinema and looks fine. There's not much to the cinematography for a similar reason and it works. The soundtrack also doesn't stand out, but it fits for what is needed in the scenes. I do like the use of storms though as it helps build a creepy vibe.

In conclusion here, I really enjoyed the concept of this movie, but I'm also slightly disappointed that it didn't go farther. I've seen quite a few of these mad scientist movies and this would be one of the better ones in general. The acting is good and there is some interesting science introduced. This is where I wish they would have taken the ideas a bit farther than what they did. The other aspects to the movie are good which includes what effects were used, the cinematography is fine and the soundtrack fits for what was needed. I'd say this is an above average movie that with a bit more added it could have been into that good range.