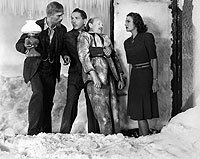 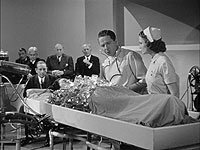 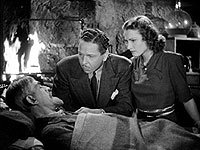 SPOILERS Boris Karloff playing a somewhat sympathetic mad doctor, Dr. Leon Kravaal, in this movie still has to pay the ultimate price for his transgressions. Even though in the end his experiments will save the lives of countless terminally ill patients from such horrible and incurable diseases like cancer and muscular scoliosis just to name a few.

Having discovered a cure for almost, if not all, every terminal diseases by freezing the person afflicted and then having the cold destroy the infected cells was something that medical science, as well as his colleagues, refused to recognize. They all made Dr. Karvaal into nothing but a fool and charlatan who was just out for the money and publicity. Having disappeared from sight some ten years ago with only his writings, in a little black book, being found at his home on a place called Crater Island. This has Dr. Tim Mason, Roger Pryor, so impressed by what he sees in Dr. Kravaal's book that he continues his experiments with astounding success. But still Dr. Mason needs to have the missing doctor to help him in getting his frozen patients to be successfully defrosted. That in order to make his, and Dr. Kravaal's experiments, a complete success that would be recognized and accepted by the entire medical community.

Traveling out to Crater Island with his nurse and fiancée Judy Blair, Jo Ann Sayers, Dr. Mason finds inside the old Kravaal home in a freezer Dr. Kravaal himself frozen stiff after being locked in the freezer for some ten years. Amazingly as Dr. Kravell defrosts he comes back to life! After getting his bearing to being dead, or frozen, for ten years Dr. Kravaal recounts what exactly happened to him. Even more fantastic what happened to the four persons Dr. Bassett, Byron Fougler, Bob Adams, Stanly Brown, D.A John Hawthorne, John Dilson, & Sheriff Stanton, Wally Wales, who were frozen stiff along with him! The four are in the next room, an adjacent, freezer, still alive like himself and waiting to be thawed out.

As usual geniuses like Dr. Kravaal are always misunderstood and treated like insane madmen in movies like this. That causes the good doctor to go wacko and end up killing those, Dr. Bassett Roger Adams D.A Hawthorne & Sheriff Stanton, whom his experiments actually not only saved but proved his point. In freezing the death out of people who are on the brink of death which they all were some ten years ago. Young Roger Adams was the most greedy and ridicules of all those whom Dr. Kravaal offed or did in. Roger grabs his formula, that he wrote on a piece of paper, that would keep people alive while frozen and threw it into the fireplace! It then where an enraged Dr. Kravall shot and killed him. Why did Roger do such an insane thing? Because he was now officially dead after being missing for over seven years and not entitle to his uncle Joseph, who's corpse in in the film was played by Lee Willard, millions that he left for him. The ironic part about all this is that Joseph was a patient of Dr. Kravaal who died because of people like Roger who wouldn't let him treat Joseph because they said that he, Dr. Kravall was nuts.

It's sad to see that Dr. Kravaal getting shot to death by either the state troopers or Canadian Mounties, it's hard to tell which, at the end of the movie. But he never the less did save Judy, whom Dr. Kravall put into suspended animation, from certain death by freezing her and then bringing her back to life just before him himself expired by having re-discovered the secret formula just before the movie ended when he was killed. In the end Dr. Kravaal in discovering a cure for tens of thousands of person who without it would face certain and agonizing death had been more vindicate for whatever bad that he did in the movie.