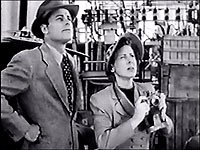 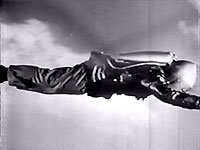 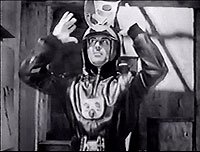 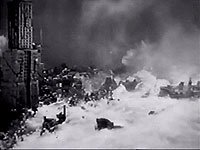 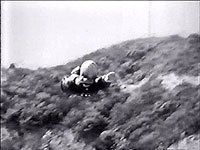 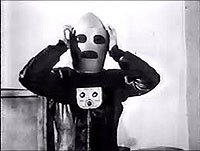 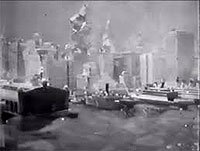 Apparently this is the 'abridged' movie edition of a Republic serial titled "King Of The Rocketmen", which is almost as awesome a title as "Lost Planet Airmen". Too bad there are no lost airmen, or lost planets in the screenplay, but I supposed you could argue that at least there is AN "airman" involved - the guy wearing the rocket pack.

Well, compressing 12 episodes into a feature essentially eliminated most of the cliffhanger sequences and turned this into a action packed romp through all the classic Republic clichés. You've got a guy in the Bullethead suit with the three control knobs. You've got fistfights breaking out every 2 or 3 minutes. You've got the same recycled special effectsflying footage (which is still pretty cool). You've got car chases, car crashes, and shoot-outs.You've got evil scientists and amazing technological break throughs used for the most banal goals possible. You've got grade "B" though "Z" actors doing their best to turn in dignified performances while spitting out lines of dialog at machine gun speed. You've got a pretty decent climax that almost justifies all the shenanigans that went on before it.

I have to admit, it was pretty hokey and cheesy, but I liked it for what it was. Not sure I would have liked sitting through 12 episodes of it, though, so this was probably my best bet.